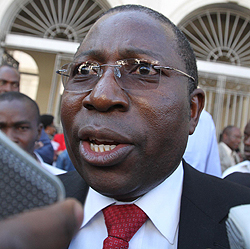 THE Shona have a wise saying: Kangoma karirise kave pedyo nekubvaruka, implying that there is always a limit to the amount of pressure the drummer can exert on his instrument while playing it and anything beyond what it can absorb could be catastrophic resulting in its disintegration before the music comes to an abrupt end.  Nothing more of these wise words can explain Elton Mangoma’s drama resulting in his subsequent suspension before the expulsion from the MDC party.
However genuine the leadership renewal agenda was/is, what can hardly be disputed is the fact that its execution was a catastrophic disaster with far-reaching consequences, not only for Mangoma, Biti, Roy Bennett, Mudzuri and Tsvangirai, but for the party itself and its relationship with the donor community. A new terrain has been opened up to be explored by all parties involved in the drama as the status quo has changed – never to be the same again. Indeed, apart from the institution of the party itself, Biti appears to be the main loser from this debacle and not Mangoma although all along, he pulled his strings from behind; leaving almost everyone to guess where is allegiance lay.
Not only did the renewal team misfire in their grand plan to unseat Tsvangirai unconstitutionally, but, their agenda become shallow and vulnerable on scrutiny, considering the fact that while they claim to be advocates of democracy, they don’t respect not just party decisions reached at by consensus but also its constitution as well. Mangoma rejects not only his suspension but also the expulsion which the renewal team erroneously view as null and void. In light of these contradictions, how can Mangoma, Biti and Mafume justify their attack of Tsvangirai for being a dictator who doesn’t abide by the constitution and yet they themselves have no respect for the ideals they claim to champion? These contradictions raise all sorts of questions which remain unanswered, thereby diluting the renewal team’s argument.
As a compromise, the party had given in to the idea of bringing forward the date of the congress a year earlier as opposed to 2016 where elections for the new leadership were to be conducted, a climb down that should have resolved the impasse amicably. Unfortunately for Mangoma and the renewal team, this isn’t enough for Tsvangirai is supposed to resign now and not tomorrow and outside congress too. Where is the democracy that the renewal advocates purport to champion?Advertisement

Besides refusing to acknowledge his suspension which Biti rubbished as null and void, Mangoma nicodemously held meetings throughout the country with party structures in violation of his suspension terms. Does a genuine democrat with presidential ambitions and the party at heart behave in this rogue manner? Without doubt, Mangoma and the renewal team have no respect whatsoever for the party and their loyalty instead lies with the donor community. This is a monumental mistake in the execution of the renewal agenda for the idea of removing Tsvangirai outside congress although popular with the donor community, is resented by grassroots supporters who constitute the incumbent’s power base. Mangoma and team greatly misjudged this equation hence their plan getting into smoke.
Tsvangirai, just like Mangoma and Biti, made numerous blunders in the past from which he should draw lessons. In the same way, Mangoma and Biti were among the team of negotiators during the GNU who failed dismally to bargain in favour of the opposition. Their failure is Tsvangirai’s and vice versa except for the incumbent’s private love affairs. For Mangoma and Biti to distance themselves from the failures of the opposition during the life span of the GNU and, instead, blame all this on Tsvangirai is being hypocritical and meant to please the donor community. Grassroots supporters don’t buy this cheap narrative for they are wiser than is assumed by the renewal team.
Or, could it be that Mangoma’s manoeuvres are meant for nothing else other than publicity? One wonders, for whose benefit beside the former treasurer general, if his agenda is funded by someone else? Isn’t there a realisation within the rank and file of the renewal team that they are oiling Zanu PF’s propaganda machinery to the detriment of the party?  Or, do they care after all? Exploring these issues in depth raises serious questions which unfortunately remain unanswered such as the Zanu PF connection which most party members fear as well as the role of the donor community.
To what extent is Roy Bennett – one of the worst victims of Zanu PF’s evil machinations – aware of Mangoma’s game which, to an extent, appears to draw a Zanu PF connection? Indeed, Mangoma’s manoeuvres become suspicious when he attempts to drag the party to the courts with the full knowledge that the judiciary is compromised in favour of Mugabe and that there is no way it could rule in Tsvangirai’s favour in this case. With due respect, one wonders why shouldn’t Mangoma just leave the party peacefully after being expelled and form his own party or join one of the several parties that have mushroomed including Madhuku’s NCA ?
Also, not to be underestimated is the part played by outsiders including the donor community in fuelling the renewal agenda. Isn’t it in the public domain that those funding the renewal offensive already have names lined up to succeed Tsvangirai? Advocates of the renewal agenda did make a monumental blunder in failing to realise and respect their power base which is the ordinary people in Chiendambuya, Chikwakwa, Checheche and Mzilikazi for that is where their umbilical cords are buried and not in London or Berlin. They are answerable first and foremost to the grassroots structures and not the donor community for they are the ones who elevated Tsvangirai during the previous congress and, subsequently, reserve the right to demote him if they so wish. That is the democracy Zimbabweans yearn for.
Tsvangirai may have moderate education but he appeals to the electorate better than professors such as Ncube and Madhuku for he is a man of the people and is well aware of his support base unlike Mangoma. That is why he is eager to visit Tokwe Mukosi flood victims only to be blocked by the educated Mugabe who has not less than seven degrees. What is education if it is devoid of conscience?
That said, it should be emphasised that debate on the succession issue in the MDC should be encouraged as acknowledged by Tsvangirai himself for renewal is the natural process of guaranteeing continuity. Even the Chinese, in spite of their long history of dictatorship have realised the necessity of changing leadership once every ten years as a natural way of perpetuating the lifespan of the Communist party and economic development. Let every post be contested for in the forthcoming MDC congress and there should be no sacred cows. If Kgalema Motlanthe squared it up against Jacob Zuma in the ANC, why shouldn’t Biti, Mudzuri, Bennett or Chamisa challenge Tsvangirai for the top post without tearing the party into pieces? That is democracy, isn’t it rather than advocating for the incumbent to resign without a vote?
Democracy entails that Tsvangirai participates in this contest unless if he is not interested as long as that is in line with the constitution of the party.  In addition, the opposition should guard against external influences that may destabilise its operations and survival. In order to succeed in this endeavour, reliance on donor funding should be curbed with immediate effect for donors don’t fund political parties for peanuts but for influence. Its either the opposition becomes self reliant and determine their own destiny or they thrive on crumbs from the donor community and subsequently lose their voice for he who pays the piper calls the tune.
The renewal agenda in the MDC is a noble idea in itself for it guarantees continuity but once it’s hijacked by greedy and self serving individuals with a hidden agenda like Mangoma, it loses appeal and is subsequently resented by the ordinary card-carrying party cadres. Mangoma overestimated his appeal among party members and ended up overplaying his drum beyond its strength, hence its disintegration into pieces as he is expelled from the party. Will the music continue? Time will tell.
William Muchayi is a pro-democracy political analyst who can be contacted on wmuchayi@gmail.com