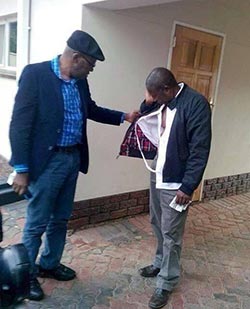 A FRIEND of mine called to find out if I had read the Elton Mangoma story in the media. Unfortunately I had not and I quickly went to nearby shops to get myself a copy of one of the local newspapers. A short man stood in a tattered shirt on the front pages of a number of daily and weekly newspapers. The images drew my sympathy and I was eager to know what had befallen that man.
Just as I was finishing reading the story my friend called again, this time with a sarcastic chuckle in his voice. “Politics is a dirty game my friend. I read the whole story in different papers and it appears Mangoma brought it on himself. A political midget who all of a sudden feels tall and challenges those who are politically taller than him.”  We shared in the laughter, not because we were condoning violence; rather the laughing delight came from the proverbial representation of the whole fiasco.
Among other reasons for his purported beatings, Mangoma is quoted as having written to party President Morgan Tsvangirai suggesting that he steps down. His widely circulated letter, authoritative in diction and blunt in meaning, pointed out that Tsvangirai was the main reason why the party failed dismally in last year’s elections. The majority of issues raised were personal to Tsvangirai and centred on his character.
An interesting dimension to Mangoma’s letter is that it was written single-handedly. The contents were his personal views and opinions. More than two weeks later, local media reported that Mangoma was striking again, this time accusing Tsvangirai of failing to protect him from party youths and calling an unconstitutional meeting of district chairpersons. He was prepared to perpetuate the fiasco and challenge Tsvangirai at all costs. More importantly, he was accusing Tsvangirai of usurping the powers of authoritative organs such as the National Council and of drifting away from the party’s constitution.
During the period leading up to his second letter, some media houses reported that Mangoma complained bitterly about the violence incident. He was quoted as having suggested that Zanu PF does not set violent youths on its leadership. Whilst I sympathise with Mangoma regarding the need to curb violence, I however do not sympathise with his views and the way he expressed them.
To begin with, Mangoma is a junior member of the MDC in all spheres. He joined the MDC later when the party was already popular and rode on the wave of popularity the party had built over years. On the MDC hierarchy, Mangoma deputises Roy Bennet. In Manicaland, he lost in his own backyard during last year’s parliamentary elections and therefore cannot claim to be a winner.Advertisement

Coming back to the issues he raised, it is interesting to note that Mangoma is accusing Tsvangirai of the very same issues he himself is guilty of. All political parties by construction derive their powers from their members. There are rules and regulations to be followed, not forgetting party constitutions. Political party constitutions are there to protect the interest of members by making sure that they guide leadership and ordinary members in between congresses. Leadership terms of offices are clearly spelt out while duties and responsibilities are clearly marked.
Tsvangirai and the rest of MDC leadership, Mangoma included, were elected at the party’s last elective congress. They were each mandated to serve the party in their respective capacities for the next five years. Surprisingly, Mangoma – influenced by impatience – believes he can single-handedly usurp the powers of thousands of party delegates who voted for Tsvangirai by calling on him to resign and appointing Khupe as heir apparent. He doesn’t seem to realise the need to consult the very same people who elected him and Tsvangirai.
Having received Mangoma letter, Tsvangirai did the right thing by circulating copies to his leadership colleagues. He went a step further by calling a crisis meeting with district structures which are the party’s grassroots links. This did not go down well with Mangoma who believed Tsvangirai was supposed to go straight to an early congress. Mangoma forgets that the very same district structures are among those who attend congress and therefore likely to pass the same resolution.
Whilst Mangoma questions Tsvangirai’s personality and performance as a leader, he forgets that the same can be said about his performance as deputy treasurer. Reports in the media suggest that the MDC was ill-equipped and poorly resourced during last year’s elections. Inadequate funding hampered campaign efforts resulting in candidates failing to match the well-equipped Zanu PF candidates. The majority of parliamentary candidates had to use their personal resources for campaigning. The responsibility for party funding is under Mangoma’s and Bennett’s portfolio who both failed dismally.
According to Mangoma, democracy and constitutionalism mean Tsvangirai was supposed to agree with his views and resign. Whilst he seems to value freedom of expression as evidenced by the contents of his letters, he doesn’t seem to understand that freedom of expression comes with freedom to differ. A divergent view, which is a fundamental element of freedom of expression, is built on the premise that people are free to differ. Tsvangirai, both as a leader and individual, was entitled to differ with Mangoma’s views.
The MDC as a party has been fighting Zanu PF policies since its formation. Mangoma’s remarks, which can be read to mean that Zanu PF youths are better than those in the MDC, are a serious issue which requires that the party takes action. His comments put to question his ability and commitment to fight and oppose Zanu PF. Affiliation to political parties is both optional and voluntary. If the present MDC does not conform to his convictions and beliefs, Mangoma is free to leave.
Whilst calling for leadership change is the right of every member, it is the way Mangoma expressed his views which defeats any positive intentions, if any. One cannot fathom the same thing happening within Zanu PF. It is outright impossible for a Zanu PF member to write straight to President Mugabe calling on him to step down. Each organisation has policies and procedures which must be followed in order to provoke certain debates. If Mangoma was genuine about his intentions, he was supposed to approach the right party organ, possibly his provincial leadership. That would have shown his respect for both the party’s structures and the position of Tsvangirai as party President.
Simply put, Mangoma is no longer a perfect fit within the MDC. His coterie of dissident associates calling for Tsvangirai to step down is simply a group of power hungry and ineffective cadres who have no capacity to lead a vibrant party. None of Mangoma’s alleged backers, including Mudzuri and Biti, have the appeal to hold a rally that attracts capacity crowds, let alone a single village.
Judging by his actions, it is fair to say Mangoma is a Zanu PF supporter holding an MDC-T membership card. Mangoma’s actions are diverting party attention from fighting and magnifying the rampant corruption reported daily in our media. It appears his is a mission to bring down Tsvangirai at all costs. Whether he is working alone or with the support of current and former MDC members is anyone’s guess. Whatever the case, Mangoma should either leave MDC voluntarily or be expelled from the party. The MDC should not worry about splits. Rather the party must instil discipline within its rank and file if they are to be trusted as an alternative party to govern the country.
Wezhira Marihwepi is a Zimbabwean writer. He can be contacted on wmarihwepi@gmail.com