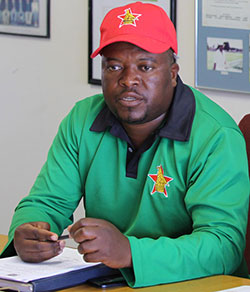 ZIMBABWE might have lost their one-off cricket Test match against world number one side South Africa by nine wickets but they emerged out of the contest with their pride intact and hope that things can only get better.
Save for the team’s collapse in the post-lunch session on day four, the hosts battled gallantly and were full value for the compliments that came their way.
There were some gritty performances, even when the Proteas took control, and Richmond Mutumbami and John Nyumbu gave a good impression of that fighting spirit on that fourth day as they battled the odds.
Zimbabwe coach Steve Mangongo, taking charge of his first Test match, was full of praises for his side.
“We have not played a Test match in more than 10 months and I think we have acquitted ourselves well given that we were playing the best Test side in the world,” said Mangongo.
“But I am happy with the way the bowlers came in. Chatara (Tendai) and (Tinashe) Panyangara really kept it tight and (John) Nyumbu’s five-for could not have come at a better time.”
Nyumbu waited until his 29th year to make his Test debut and, against a powerful batting line-up, took five wickets.
“It has been a rocky road for me but it has culminated in this now and at times like this you don’t remember what has gone in the past, you live in the moment,” said Nyumbu.
“My passion for the sport has kept me going, so many people had written me off. But I’m glad I held on and kept going because I have managed to get to this stage.
“My best moment was getting AB (de Villiers) out. It’s an honour to bowl to the best batsman in the world and an even greater honour to get him out.
“My team-mates helped me a lot as some bowlers were tiring, the seniors were supporting me and I’m happy that these guys can help me like that.”
Faf du Plessis said Nyumbu did well.
“He bowled very well, he bowled a lot of overs and not many bad balls. When a guy comes in on debut, generally, you get a lot more to hit. He deserved his five wickets.
“The wicket did assist him, the ball was turning, for a Test match to spin that much on day two is unusual. These are the conditions you would expect him to want to play in.”
Meanwhile, South Africa’s left-arm fast bowler Beuran Hendricks, who was expected to join the Proteas for the three ODIs agaist Zimbabwe in Bulawayo starting on Sunday, has been ruled out because of a back injury.Advertisement

According to Cricket South Africa, Hendricks has suffered a lumbar strain and has been advised a period of rest and recovery.
South Africa’s frontline pace bowlers – Dale Steyn, Morne Morkel and Vernon Philander – have been rested for the ODI series, but will return for the tri-series against Zimbabwe and Australia.