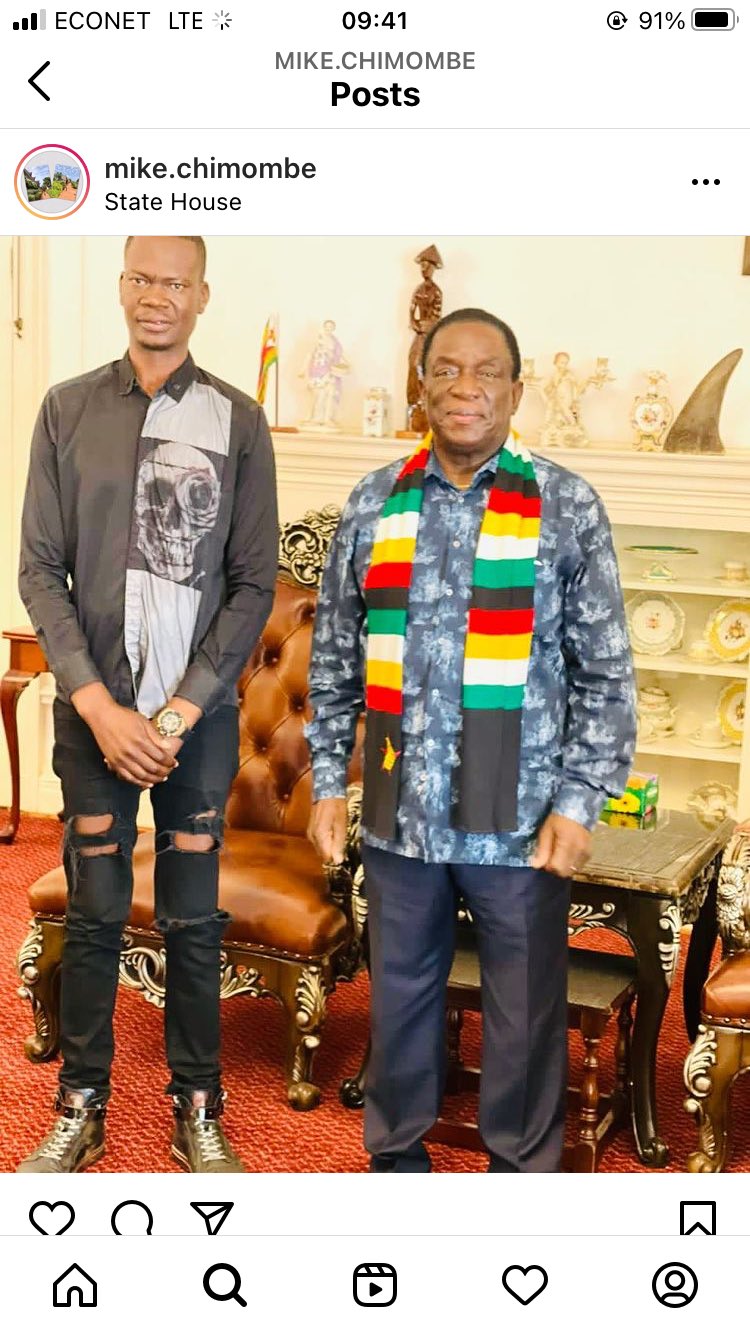 In the undated photo, although recent, the political activist and businessman, is seen wearing designer-torn black jeans and a casual shirt.

“Look guys, there is a certain kind of dressing which you just can’t do when you are going to meet the Head of State and President of your country. That’s just disrespectful to both the man and the office. If you can’t go kwatezvara wakadaro then don’t for the President,” Mangwana warned on Twitter.

when the person you are going to meet deserves the respect then you may consider dressing up in a respectful manner.

Mnangagwa has been kind with people seeking to pause for photos with him.

Last year, senior Zanu PF officials accused some people of using the photo opportunities for name-dropping purposes and soliciting for alcohol in bars and using the images to bully police and other public officials.

Commenting on the photo, exiled former Tourism Minister Walter Mzembi blamed Mnangagwa’s aides for allowing the man to pass through protocol without questioning his dressing.

“Problem is those that screen and allow such guests through and those who take the photos, ndonhubu! President depends on everyone doing their work but if they set him up for scorn with such company then they are not fit for purpose!”

Late former President Robert Mugabe’s son Chatunga said there was nothing for Mangwana to be angry about as the president is not God.

“Dude he is just a President, not God munhu anopfeka zvaanoda,” he wrote back.

@nickmangwana
There is nothing wrong with the dressing. Unless HE objected to the style. If he did not, vamwe mese nyararai. You are using stereotypes in your head to judge. If you people wear that always, then they can wear that. We must deal with our stereotypes!
President Havasi tezvara…haana kushama mfana uyu ….akapfeka …even president Havana kupfenyera shirt ….if there was a strict dress code masecurity aifanira kusabvumira Kuti apinde ….

@kayz51055613
Replying to
@nickmangwana
He is the leader of the youths, hence thats the youths dressing, so i dnt see anything wrong, Lionel Messi once visited a President in shorts and a tee, coz he iz a footballer, that’s his custom wear, also it depends with the meeting was it business or casual