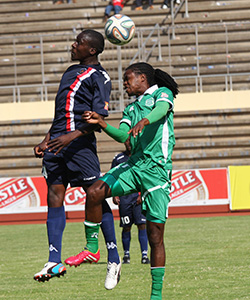 CAPS United piled on the misery on Harare City after they fought back to settle for a 1-1 draw against the Sunshine City Boys in a Castle Lager Premier Soccer League match at the National Sports Stadium on Sunday.
United who wind up their campaign against leaders ZPC Kariba now have 50 points with one match left before the end season.
The draw took Harare City’s points tally to 35 points, the same as Shabanie Mine who triumphed 2-1 against Highlanders.
Harare City had the best opportunities in the first half with midfielder Tendai Ngulube and Francesco Zekumbawira coming close. Godknows Mangani also headed wide a cross by Tapiwa Khumbuyani in the 18th minute.
However, the Sunshine City Boys went ahead on 28 minutes through Agrippa Murimba who had the simple task of slotting the ball into the nets after a good set up by Zekumbawira.

Caps United were never convincing in the first half in which they played second fiddle to City.
But they upped their game in the second half as they started to launch wave after wave of attacks and in numbers, looking for an equalizer.
And in the 64th minute Ronald Pfumbidzai struck with a low ground shot that beat goalkeeper Maxwell Nyamupangenedengu in goals for City.
Unimpressed Caps United coach Taurai Mangwiro blasted his charges for their attitude afterwards.
“We had to dig deeper to rescue a point but I didn’t like the body language of the players in the first half. I saw a team that was playing as if they didn’t want to win,” Mangwiro said.
“Maybe they were saying we have done enough but I want to say that we would want to win as many games as we can. We would want to win and we will give it our best shot in our last match.”

Confident his side will survive relegation … City coach Masimba Dinyero