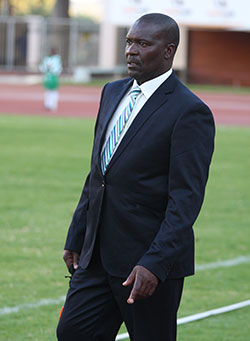 ZIFA have appointed former Caps United and Monomotapa coach Taurai Mangwiro as the association’s technical director.
For the past six games, Zifa have been operating without a technical director, following the controversial sacking of Mangwiro’s predecessor Maxwell Jongwe.
Jongwe had in turn replaced Nelson Matongorere who had been fired in controversial circumstances in January 2014.
Zifa spokesperson Xolisani Gwesela announced in a statement late Tuesday the hiring of Mangwiro.
“The Zimbabwe Football Association (Zifa) is delighted to confirm the appointment of Taurayi Mangwiro, as its Technical Director. He has already assumed office,” Gwesela said.
“Mangwiro has a distinguished football development and management experience as a coach and coaches’ instructor. The newly appointed technical director, who is also a Caf regional instructor, is a holder of a Caf A license and he also has a German International B license.
“Locally, Mangwiro has the ZIFA Advanced Level coaching certificate. Zifa have great confidence in the ability of Mangwiro to contribute immensely towards the uplifting of coaching standards and nurturing of young talent because of his teaching and coaching background.”
Mangwiro has also before had a stint with the national Under-20 as both assistant coach and head coach.
Mangwiro who is already a member of the Zifa High Performance Committee, has already rolled out his programme which emphasises on coaches’ education and is soon expected to tour the country to implement and supervise grassroots coaching structures.Advertisement