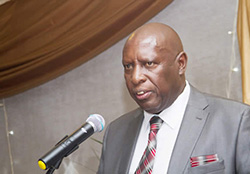 OVER 110 households are set to benefit from Himalaya, a 100kW micro hydro power plant commissioned in Marange District which could point the way towards energy self-reliance for Zimbabwe.
The sustainable energy project was launched last week by energy and power development minister, Samuel Undenge and was partly funded by the European Union (EU) and Oxfam.
The plant will power two irrigation schemes covering over 25 hectares, ensuring continued water and power supply in the area.
Manicaland has seven independent power producers (IPPs) that are currently supplying energy to the national grid.
These include the Border Timbers biomass plant producing 5,5 megawatts, Green Fuel Chisumbanje biomass plant (18,3MW) and the Nyangani Renewable Energy owned Nyamhingura (1,1MW), Pungwe A (2,7MW),  Pungwe B (15,25MW) and Duru (2,2MW) hydro power plants.
These IPPs have a combined capacity to produce over 40MW against the province’s power demand of approximately 130MW but show the potential for IPPs to effectively address Zimbabwe’s energy demands.
About 40 percent of Zimbabwe’s 13 million population has access to electricity, with 90 percent of available power being used in urban areas, according to the Zimbabwe Energy Regulatory Authority (Zera).
Minister Undenge attributes the province’s success in independent power generation to its mountainous terrain.
“The potential for IPPs, mostly small hydro power station, exists on both irrigation dams and perennial rivers especially in the eastern region due to its unique mountainous terrain, which is conducive for such power plants,” he told The Source.
Permanent load shedding
With Zimbabwe battling an energy shortage as demand continues to outrun supply — it has installed capacity to generate 1,846MW against a peak demand of 2,200MW but is producing an average of 1,501MW with the shortfall supplemented with imports mainly from Mozambique and load-shedding — Zera has licensed 19 IPPs to complement struggling power utility, Zesa Holdings.
The poor output has resulted in permanent load shedding being introduced for both households and industry impacting negatively on economic recovery efforts.
Undenge noted that Manicaland had potential to generate its own power and feed surplus to the national grid as more power projects were underway.Advertisement

“Manicaland has great potential to produce its own power and at the same time feed to the national grid. Seven IPPs including the Himalaya plant, which has just taken off the ground, are already operational while about five others are still in the pipeline,” he said.
The state-owned Zimbabwe Power Company (ZPC) also intends to build a 30MW hydro power station on the Gairezi River in Nyanga.
Several other smaller projects in the pipeline include the Rusitu, Tsanga, Osborne Dam and Kondo Dam hydro power plants.
Most of the IPPs are being stalled by lack of funding as some of them required over $1 billion, the high cost of borrowing and perceived country risk.
New national projects licenced by Zera so far could generate an additional 3,500 megawatts, over three times current production by 2018 but the small plants which require less funding and are easier to operate, are the way to go, Undenge noted.