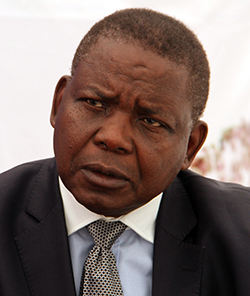 MUTARE: Deputy mines minister Fred Moyo says government is working towards improving the operations of small-scale miners who have contributed significantly towards the revival of the country’s economy.
Addressing a breakfast meeting organised by Zimbabwe National Chamber of Commerce (ZNCC) at a local hotel last week, Moyo said government has given small scale miners in the province a target of producing 700 kilogrammes of gold this year.
Last year (2016) Manicaland produced half a tonne.
Government is trying to plug leakages of gold by luring small-scale miners to channel their gold through formal channels.
“We really appreciate what you did last year. You produced half a tonne of gold,” said Moyo.
“Let`s pull together 700 kgs of gold but if you could do a tonne we will be very happy. Gold is the mineral that is anchoring our economy so let’s continue to strive.”
ZNCC Manicaland chapter secretary Kenneth Saruchera implored government to avail funding to the sector to improve production.
“We hope government would finance the sector as individual miners can only finance themselves only to a certain extent…
“Small-scale miners can increase gold production if they have the requisite technology and working capital to improve production efficiencies,” he said.
The deputy minister concurred saying; “There is need for capitalisation of the sector as they are only able to extract 60 percent of the gold in the ore they are extracting.”
Moyo said the small-scale miners were working hard to mine gold from the ground but were still losing 30 percent of the mineral because they were not using modern technology.
The country has begun the process of decriminalising the artisanal mining to enable the sector to contribute meaningful to the growth of the economy.
Manicaland Miners Association chairperson, Lovemore Kaswa, said the move was “noble as it offered some unemployed youths a chance to get involved in mining”.
Kaswa said this has also increased flow of gold to Fidelity Printers and Refiners.
“Small scale miners have contributed nearly 40 percent of the total output since 2015 when government decriminalized artisanal mining,” Kaswa said.
Gold is the country’s second largest mineral export after platinum. Between 1980 and August 2016, the country extracted about 586 tons of gold.Advertisement

Annual gold production peaked in 1999 at 30, 2 tones and was at its lowest in 2008 at just three tones.
Zimbabwe has more than 700,000 small-scale gold miners whose production can push volumes if they are all embraced by the formal system.