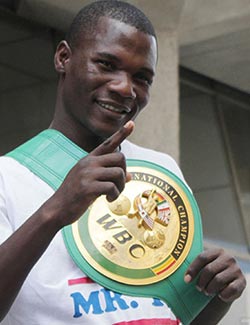 NEW World Boxing Council (WBC) international welterweight champion Charles Manyuchi says he is now ready to take on the Money Man, Floyd Mayweather.
Manyuchi, who also holds the African Boxing Union welterweight champion, recently beat Ghana’s Patrick Allottey at Lusaka Government Complex in Lusaka, Zambia, becoming the first Zimbabwean boxer to win the title.
And Manyuchi, who has surpassed the achievements of Langton “School Boy” Tinago, Proud “Kilimanjaro” Chinembiri and Arifonso “Mosquito” Zvenyika said he has now set his sights on defending his title and then facing five-division world champion American Mayweather.
“The fight was very good. I am very happy that I beat someone who had a record of 30 fights undefeated. It means a lot to me because I am now a Zimbabwean, African and world champion,” he said.
“I got confidence to fight him despite his good record because I received a lot of support. The Zambian people put in a lot of hard work and resources to ensure that the fight was a success.”
Manyuchi was congratulated by the government with the minister of the sport ministry, Andrew Langa promising to facilitate a meeting between the Zimbabwean boxing hero with President Robert Mugabe.
Langa also said the government was fully behind his success and also appealed to the corporate world to chip in and support the boxing icon.Advertisement