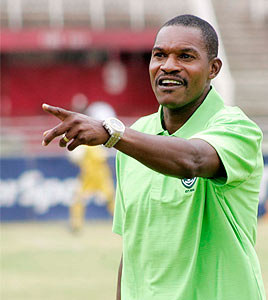 NORMAN Mapeza has demanded consistency from his charges ahead of a tough Castle Lager Premiership clash against How Mine at Mandava Stadium on Wednesday.
Both teams are coming from huge wins over the weekend with How Mine having massacred Hwahwa 6-0 at Barbourfields while FC Platinum thumped Tsholotsho 3-0 at Mandava.
But the difference between the two sides is that Platinum were coming from four losses which had put Mapeza under pressure.
And after the win over newboys Tsholotsho, he wants more.
“We need to play our normal game otherwise there will be pressure on us. But what is critical is consistency to build confidence in the team after our last win,” said Mapeza.
“We went through a rough patch and we have to be up to the challenge against How Mine. They are a good side with a good players and good coach, so I am expecting a tight match.”
Mapeza will be missing top striker Donald Ngoma who is suspended for one match after accumulating three yellow cards.
Meanwhile How Mine coach, Luke Masomere, who made his name at Shabanie Mine is no stranger to Mandava and believes he is just returning home.
“Zvishavane is my home and I enjoy playing at Mandava and I am very positive going into this match because we played very well against Hwahwa.
“Six goals were for Caps (United) but we gave them to Hwahwa. It should be a good match against Platinum,” the loud-mouthed Masomere said.
In other matches on Wednesday, Tsholotsho will be seeking to return to winning ways when they engage improving Chapungu, who fought from two goals down to force a 2-2 away draw to Chapungu.
Harare City, fresh from a 3-1 hammering by Triangle host ZPC Kariba at Rufaro while Dongo Sawmill take on Buffaloes at Vhengere Stadium.
FIXTURES
Wednesday: Tsholotsho FC v Chapungu (White City Stadium), Harare City v ZPC Kariba (Rufaro Stadium), FC Platinum v How Mine (Mandava Stadium), Flame Lily v Highlanders (Lafarge Stadium), Dongo Sawmill v Buffaloes (Vhengere Stadium), Chicken Inn v Triangle United (Luveve Stadium)
Thursday: Caps United v Hwange (National Sports Stadium) Whawha v Dynamos (Ascot Stadium)
Saturday: ZPC Kariba v Chicken Inn (Gwanzura Stadium), How Mine v Tsholotsho (Luveve Stadium), Chapungu v Dongo Sawmill (Ascot Stadium)Advertisement