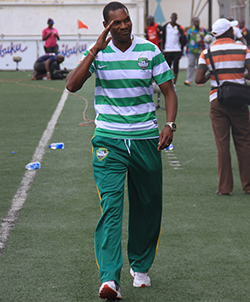 FC PLATINUM coach Norman Mapeza was a relieved man after his side recorded a 3-0 league home win over Tsholotsho on Friday to end a three-match losing streak.
Young Warriors striker Walter Musona grabbed a brace while Brian Muzondiwa also scored to hand FC Platinum victory.
The result saw the platinum miners moving out of the relegation zone.
After bowing out of the CAF Confederation Cup at the first round stage after being dumped by Tanzania’s Young Africans, Mapeza went on to register a slow start in the league campaign.
Defeats by Caps United, Harare City, Chicken Inn and debutants WhaWha saw pressure mounting on Mapeza.
“We have been playing well but unfortunately good results have not been coming our way. Look at the WhaWha match, we could have won by a bigger margin but we ended up losing after playing so well,” Mapeza said.
“I am happy my players have been patient and they never looked down. I can give you an example of a fisherman who goes to the river and spends the whole day there but goes home empty handed.
“He goes back again the following day and still returns home with nothing. But one day he will have a good catch. That is how football is sometimes.”
The Zvishavane side’s recovery would be put to test in their next game which is again at home against How Mine.
Saturday Results: How Mine 6-0 Whawha (Barbourfields), ZPC Kariba 1-1 Flame Lily (Gwanzura)
Sunday Fixtures: Highlanders v CAPS United (Barbourfields), Buffaloes v Chapungu (Sakubva), Hwange v Dongo Sawmill (Colliery), Triangle v Harare City (Gibbo), Dynamos v Chicken Inn (Rufaro)