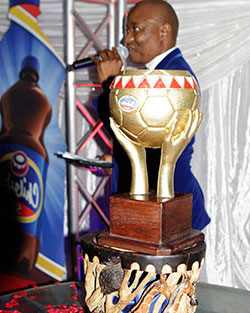 NORMAN Mapeza will again welcome Caps United to Mandava Stadium-this time in the Chibuku Super Cup quarterfinals on Saturday, hoping to complete a quick double over the Harare side.
The game, to be broadcast by SuperSport, will kick off at 1500hrs.
Last week, Platinum muzzled Caps 6-0 in the final of the ZNA Charity Shield in addition to having won 2-1 in the reverse fixture of the Castle Lager Premier Soccer League.
Caps have been mired in all sorts of financial problems with players boycotting training ahead of last Thursday’s league match against Bantu Rovers in Bulawayo where they only arrived in the morning of the game.
But on Thursday, the club’s public relations manager Joyce Kapota confirmed they had secured money to cover the players’ salaries, allowances and bonuses owing from July and August.
Mapeza does not want to look at their opponents problems.
“We don’t want to read into what happened last week. This is a new game and they might come up with a new game plan.
“So we will be taking the match seriously because we want to reach the final of the cup and even win it,” Mapeza said.
Such is the ambition of the former Warriors coach, whose team is endowed with talent such as Zambian internationals Aaron Katebe, Obrey Chirwa, who scored a hattrick last week, Qadr Amin, Donald Ngoma, Mitchelle Katsvairo and new signing Ashley Mukwena.
For Caps, their hopes lie in Hardlife Zvirekwi, hardworking captain Tapuwa Khumbuyani and forceful striker Dominic Chungwa.
The vital cog in midfield is Tendai Samanja, who will have to be at his best to deal with Platinum’s Thabani Kamusoko to cut off the supply to the strikers.
Before this match, lowly rated Chiredzi has the chance to reach the last four when they meet Harare City in the first semi-final of the day.
The action will move to Bulawayo on Sunday when under-fire Kelvin Kaindu leads Highlanders against How Mine while the last quarterfinal match will feature Black Rhinos and Triangle at Ascot Stadium in Gweru on Monday afternoon.
Winners of the tournament will pocket $75,000 while the losing finalists will take home $50,000.
The two losing semi-finalists will each pocket $25,000 while teams that get knocked out at the quarter-final stage will walk away $20,000 richer. The teams that were knocked out of the competition are guaranteed $15 000 each.Advertisement