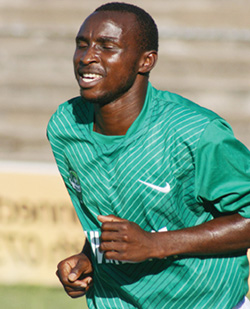 FC PLATINUM coach Norman Mapeza has taken a swipe at his striker Benjamin Marere for a lethargic showing during Wednesday’s 0-0 draw away at Caps United.
Marere came on as a second half substitute as the platinum miners sought to break the dread-lock but the veteran forward was guilty of bad positioning and missing a few chances.
The poor contribution drew the ire of Mapeza who castigated him.
“I was not happy with Marere at all. I have to be honest because I am his coach and I am a former footballer. If someone does not do well I will be honest with him to tell him that I am not happy,” Mapeza said.
The draw saw the platinum miners sliding one place down to fifth-spot on the log.
They are fighting for a top-four finish and visit Chicken Inn on Saturday.
“The target of a top-four finish is very possible. We are doing some calculations and this point gained is very important for us. We are just going back home to prepare for Chicken Inn. We just have to pick up points in our remaining three games,” Mapeza said.
A top four finish come with the priviledge of qualifying for the four-team Mbada Diamonds Cup.
FIXTURES
Saturday: FC Platinum v Chicken Inn, Harare City v ZPC Kariba, How Mine v Chapungu
Sunday: Black Rhinos v Shabanie Mine, Dynamos v Bantu Rovers, Buffaloes v Caps United, Triangle United v Hwange, Highlanders v Chiredzi