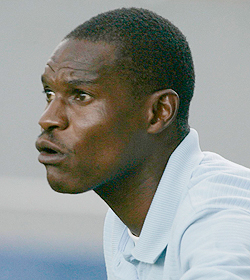 SINCE taking charge at FC Platinum more than a month ago, Norman Mapeza is yet to record a home Premier Soccer League victory.
He has seen his charges lose 1-0 to Highlanders and draw 0-0 against Dynamos at Mandava, while winning 1-0 away to Black Rhinos.
FC Platinum have beaten Caps United twice in cup competitions (6-0 and 1-0), but the first home win remains elusive.
Does this mean he is coming under pressure?
“No, not at all,” Mapeza said ahead of Saturday’s home time against Moses Chunga’s Buffaloes.
“I would like to believe that the team is coming up very well and I am optimistic that the results will come soon.
“Our performance against Dynamos was not bad at all, we created some chances and we were fluid on the ball most of the time, but we just need that breakthrough.
“I don’t want to put my players under pressure. We have seven games to play; they will deliver.”
Platinum have dropped to eighth place with 32 points, 11 away from leaders Dynamos.
Such a position makes it difficult for them to qualify for next year’s One Wallet top eight cup and even the Independence Trophy, which they won this year.
But they have the players to see them past Buffaloes-Obrey Chirwa, Qadr Amin, Thabani Kamusoko, Aaron Katebe, Mitchelle Katsvairo and Donald Ngoma.
Buffaloes are unbeaten under Chunga, having drawn 0-0 against Highlanders away and scalped Triangle 2-1 last weekend in Mutare and will be aiming to hand Mapeza his second home defeat.
In other matches this weekend, How Mine and Chicken Inn fight for bragging rights in Bulawayo while Chapungu host relegation threatened Chiredzi at Ascot.
Dynamos face Shabanie on Sunday with troubled Highlanders taking on second placed ZPC Kariba at Hartsfield.
Triangle, who fired goalkeeper’s coach Gift Muzadzi on Wednesday night are at home to a resurgent Harare City hoping to revive their faltering fortunes. On Monday, Bantu Rovers welcome Hwange to Hartsfield.
FIXTURES
Saturday: How Mine v Chicken Inn (Hartsfield), FC Platinum v Buffaloes (Mandava), Chapungu v Chiredzi (Ascot), Black Rhinos v Caps United (Rimuka SS)
Sunday: Dynamos v Shabanie Mine (Rufaro SS), Triangle v Harare City (Gibbo), Highlanders v ZPC Kariba (Hartsfield)Advertisement