FC PLATINUM coach Norman Mapeza says he is unfazed by the brilliant form of Zimbabwe international midfielder Kudakwashe Mahachi ahead of his team’s opening CAF Champions League Group B match against South African side Orlando Pirates at Barbourfields Stadium Saturday.

Mahachi, who initially struggled to settle at Orlando Pirates, has been in brilliant form ahead of the crucial match.

He rose from the bench to score two goals in the Buccaneers’ last two league matches against Highlands Park and Chippa United respectively.

However, Mapeza, who is leading FC Platinum in their first appearance in the group stages of the continent’s most prestigious inter-club competition, said he was not worried about the good form of his compatriot.

“I’m not worried about Kudakwashe Mahachi. I don’t worry about individuals,” Mapeza told reporters at a Press briefing ahead of the match in Bulawayo.

“The only player who I can say I will be worried about is Lionel Messi, not anybody who is coming from this side.

“As a club, we don’t concentrate on individuals. We concentrate on the whole team because Kuda won’t play alone. He will play alongside 17 other players. If we focus on one individual in a team then we are not supposed to be coaches or even footballers,” Mapeza said. 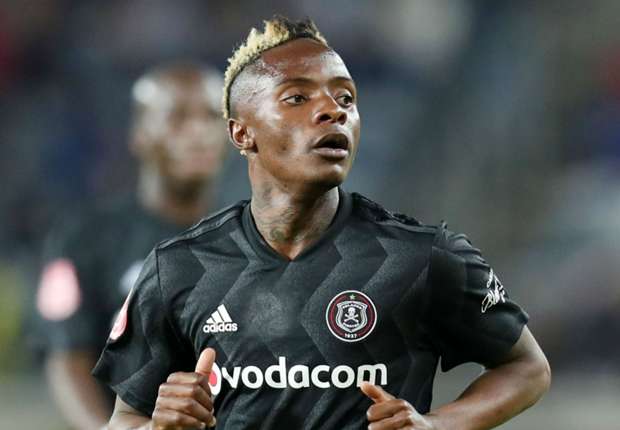 The FC Platinum gaffer said his team was proud to be competing against the best clubs on the continent after being drawn in Group B with Pirates, holders Esperance of Tunisia and Guinea’s Horoya‚ who beat 2016 champions Mamelodi Sundowns to a place in last year’s quarterfinals.

“It’s a massive game for us as a club, for me as a coach and for the players.

“We are playing at the highest level of African football. If we were in Europe, this would be the Uefa Champions League. This is the apex of the continental game…When we started this journey in the Champions League, nobody gave us a chance because everybody was talking about the fact that we got hammered the last time but it’s the nature of the game. We have worked so hard for this and I hope the guys will enjoy this experience,” Mapeza said.

The former Warriors coach revealed that former Kaizer Chiefs striker Edmore Chirambadare, who signed for FC Platinum, would not be available for the Orlando Pirates clash as he is yet to receive his clearance from his former club Maccabi FC.

Chirambadare is also expected to miss FC Platinum’s first away match against Esperance in Tunis on January 18.

Meanwhile, Orlando Pirates, who were last in Zimbabwe 22 years ago when they beat CAPS United 1-0 in Harare, were expected to arrive in Bulawayo on Friday afternoon.