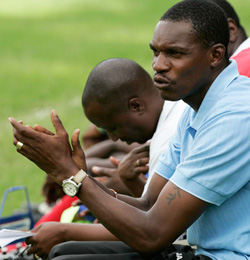 NORMAN Mapeza will be seeking to end the season on a high as he prepares for the Chibuku Super Cup final showdown against Harare City at Mandava Stadium on Sunday.
The Premiership programme takes a break this weekend to pave way for the Chibuku Cup final with the national team also involved in an international friendly in Morocco scheduled for Saturday.
Mapeza has surpassed expectations as he enjoys his return to the dugout after being held up by allegations of involvement in the Asiagate match-fixing scandal.
The ex-Warriors coach has taken FC Platinum to the top four in the league table with one game left before the end of the campaign after overcoming Hwange 1-0 on Sunday.
A top four finish guarantees them a place in the rich Mbada Diamonds Cup at the end of the league programme.
Mapeza replaced Lloyd Mutasa in August this year, taking over the hot seat at the Zvishavane-based side which was then struggling to find their feet.
However, the unassuming Mapeza demonstrated his astuteness and restored confidence to the players and results are bare now for everyone to see.
Now, Mapeza has another opportunity to land one of the trophies on offer this season – the Chibuku Super Cup when he faces Harare City on Sunday.
Mapeza’s coaching career had always looked promising after he led Monomotapa to the league title in 2008 before he was banned for his alleged involvement in the match-fixing scandal by Zifa in 2012.
The former Warriors captain spent two years on the side-lines as he fought against his ban but since his return to the dug-out this year, he has proved his technical ability as a coach.
After edging army side Black Rhinos 1-0 in the semi-final, he now has to clear the hurdle erected by Harare City to win the coveted Chibuku Super Cup.
Following his victory against Black Rhinos in the semi-final at Rufaro he expressed delight at the time.
“I spoke to the boys before the match and told them it could be achieved. I told them this is a cup semi-final therefore the tensions will be high so they had to be prepared,” he said.
“I’m happy to have reached the final. I have been at FC Platinum for only two months so to take the club to a cup final, I think it’s a great achievement.
“We have been working very hard. And I have been telling these guys the importance of playing in a cup final and I think we have achieved that.”Advertisement

Harare City also beat Highlanders 3-0 in the semi-final to seal a place in the final.