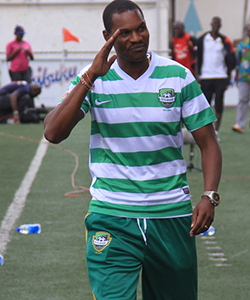 Highlanders 1-2 FC Platinum
FC Platinum came from behind to stun Highlanders and register their first ever win at Barbourfields Stadium on Thursday in a Castle Premiership match.
Platinum remained in fourth place with 34 points, one behind defending champions Dynamos and Triangle and are looking at a strong finish and are still very much in the title race.
They are now unbeaten in 11 matches in all competitions and are in the last eight of the Chibuku Super Cup-a competition they won last year.
Platinum were promoted into the Premiership in 2011 but had never before beaten Highlanders in Bulawayo.
And it all seemed to be going according to script for Bosso as Knox Mutizwa sliced home a header from an Obadiah Tarumbwa crosss after just four minutes.
Highlanders held on until the 43rd minute as they failed to increase their tally and paid dearly.
Brian Muzondiwa sliced the ball between Douglas Sibanda and Felix Chindungwe for overlapping left back Elvis Moyo to slot home the leveler.
And 63 minutes into the match, Sibanda made a mess of a ball and Tarisai Rukanda ran clear of goal.
With goalkeeper Njabulo Nyoni coming off his line, Rukanda easily beat him to the near post to give Platinum the lead and eventually the three points.
Platinum coach Norman Mapeza was over the moon.
“We conceded early but I told the boys not to panic and play their usual game. At the end we scored two fantastic goals and I am very happy for the boys,” said Mapeza.
Bosso coach Bongani Mafu rued defensive mistakes for the loss.
“We made mistakes in the defence and we paid for that. We dominated the match but we could not get the goals.
‘There is always pressure, it is always there and I am sure the boys know what to do to avoid that pressure,’ Mafu said.
Bosso’s next trip is to Gweru on Sunday where they face Whawha as they hope to keep their place in the top eight.