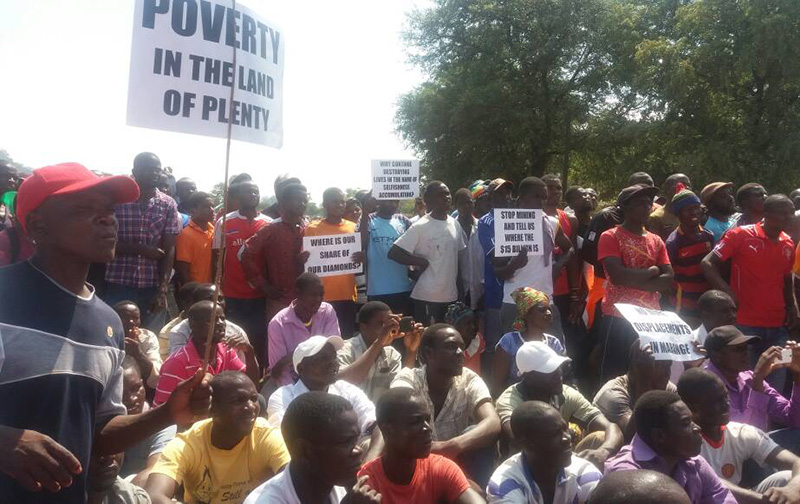 MARANGE: Two minors were rushed unconscious to a nearby clinic Monday after police fired tear gas at angry villagers demonstrating against a government-owned diamond company.

The protestors accuse the Zimbabwe Consolidated Diamond Company (ZCDC) of not doing enough to improve their lives.

Villagers said they were deeply concerned that wealth realized from diamond fields was not benefitting the local community with little done to improve infrastructure and provide health and education facilities.

The disgruntled locals woke up in the morning and gathered at Chipindirwe where they tried to stop busses from ferrying workers to the mine.

However, their plan was scuttled by armed police officers. Some of the cops were on horsebacks while others had dogs along with baton sticks.

They later marched from to Zengeni expecting to be addressed by mine authorities.

However, the mine management failed to turn up resulting in the protestors advancing towards a perimeter fence at Bravo A mine complex singing and chanting slogans.

Police then fired teargas, forcing the villagers had to scramble for cover.

Bocha Diamond Community Trust chairman Lovemore Mukwada claimed that two minors were rushed to clinic for treatment after they were chocked by tear gas.

“We don’t know why the police are tear-gassing peaceful protesters,” he said.

“We are here to register our displeasure as a local community. We want to send a signal to the mining company that enough is enough.

“I don’t know why they decided to fire teargas because, as you can see, we were not being violent. People are just gathered in front of the gate and not armed.”

Mukwada continued; “We just want our concerns to be heard.

“We have decided to hold this demonstration to show our dissatisfaction with the way we are being treated by the diamond companies.

“There is no development to talk of in terms of education, health and infrastructure.

“When diamonds were discovered here we thought we were lucky, but it turns out to be a curse.

Local communities are furious that they continue to suffer the adverse effects of diamond mining while others elsewhere reap the rewards.

“What we are saying is that we want a share as a community because we are experiencing dog bites, shooting by mine guards while some have lost their lives without even compensation.

“We are wondering why the government or President Emmerson Mnangagwa cannot intervene so that, as a community, we start benefitting,” said Mukwada.

Villagers they were willing to core-exist with the mining companies as long the firms take social responsibilities seriously.

Mukwada said they would continue staging demonstrations until their grievances are attended to by the mine authorities.

Chief Marange’s representative, Nyasha Marange, added, “People did not benefit from the previous miners. Our health centres, dip-tanks and roads were not developed.

“What happened in the past happened but what worries us most as the traditional leadership of Marange is that we were never consulted about ZCDC.

“This company is not even employing the locals and the infrastructure is the same.

“What is causing these demonstrations is that the mine is employing outsiders even on menial jobs such as security guards.

“Our constitution is clear that locals should benefit from their local resources.”
Marange hit out at the ZCDC management describing them as “ignorant and shallow minded”.

He also took a swipe at the local legislator Chris Mushohwe, saying “he sleeps on duty while the community is exploited”.

“Mushohwe has failed to stand for the local community. Instead of focusing on initiating developmental projects, he spends most of his time meddling in the affairs of local traditional leadership.”