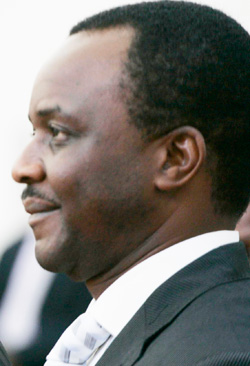 THERE were cheers in parliament this Thursday as opposition MDC-T legislator for Mabvuku Tafara James Maridadi exchanged tough words with ICTs minister Supa Mandiwanzira.
The two clashed over the minister’s decision to lead government into purchasing a stake in the struggling mobile phone company Telecel.
Mandiwanzira was appearing before the Media, Information Communication Technology and Cyber Security committee in which Maridadi is a member to explain government’s decision to invest $40 million in Telecel as well as progress in formulating the Cybercrime Bill.
The exchange started with Maridadi quizzing Mandiwanzira over his decision to utilise the Universal Services Fund in bankrolling acquisition of a 60 percent stake in Telecel.
“As a minister responsible for that fund, and your discretion over it, you put money into ZARNet and we all know ZARNet as a company that is broke,” said Maridadi summarising the minister’s presentation.
He added, “Then ZARNet purchases shares in Telecel International so that you run Telecel Zimbabwe with the hope that you bring it to profitability and then as government you dispose of it.
“It would be interesting to get to understand the constitution of the Universal Services Fund and whether is allows the minister the discretion to put money into ZARNet, a company which is dead.”
Mandiwanzira, who described Maridadi as animated in questioning him, said the legislator’s questions were too opinionated. He said the decision was lawful and common around the world.
“Honourable Maridadi expressed his view that it is not government’s business to buy companies that are not doing well; it is his opinion,” said Mandiwanzira.
“If I was allowed to give an opinion here I would tell honourable members here that, in fact, globally it’s the practice where companies have a significant impact on the economy; if they get into trouble they get government bailout. We have seen it in the UK with the Royal Bank of Scotland, the same has happened in the US.”

Maridadi raised a point of order arguing that the examples were from the developed world were the central banks have the resources whereas Zimbabwean government was financially bankrupt.Advertisement

“We are talking of a broke government here which is trying to buy companies which are equally broke. Is it in the government’s interest to put money into companies which are not doing well?
“Netone is in a myriad of problems right now but we have heard that owner of Econet which got a licence two years later is now a billionaire.”
Mandiwanzira responded saying, “I think the term broke was popularized by the former minister of Finance honourable Tendai Biti.
“To my understanding, the broke government was able to buy him a Mercedes Benz and all the luxuries.”
Maridadi interjected saying, “The government is broke. That’s why you went to the fund instead of treasury.
“The minister is being petty. He (the minister) has a tendency of being petty. Let’s deal with substantive issues.”
Mandiwanzira responded,” He had started with an opinion so, I said let me give my opinion because when we are playing that game, everyone has an opinion. Let me go back and respond, I respect you Mr Chair.”
The minister then insisted that government had a responsibility to save sinking critical entities and reiterated that the state’s shares in Telecel Zimbabwe would be disposed once viability had been restored at the company.