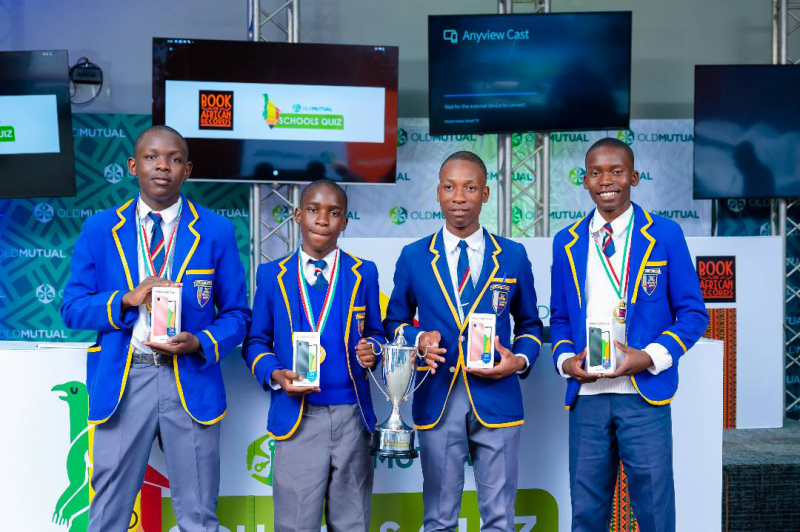 In the nail biting finale, the competition was divided into six heat sessions in which points were collected.

Marist Brothers came out on top with 54 points and Zengeza High 1 became the first runner up with 52 points, with only two points separating the two schools.

Both schools were crowd favourites because of their quickness to respond to the questions asked.

In an interview after the event, Marist Brothers quiz mentor, Committee Magwada heaped praise on his boys for the hard work they put in and their fighting spirit to win the competition. He also gave special thanks to the team captain Rodney Matikari, a form one student who led and held the team together.

“I am very proud of my boys and how hard they have worked to get here. I always encourage them to stand tall and fight till the end and today we go back to Nyanga as the nation’s best quiz team… this has been an insightful and exhilarating experience, all thanks to Old Mutual Zimbabwe and its partners for organising a beautiful tournament,” Magwada said.

“It is with no doubt that the students were well prepared and had done their thorough research.

“Some of the questions were difficult even for adults present and everyone who attended took away one or two learnings.

Congratulations to all students who showed up and participated. To the winners and runner-ups,; makorokoto, amhlophe,” Mudarikiri said.

The national finals were held at Cresta Lodge in the capital through a two-day programme that was mixed with different activities for the students apart from the quiz itself. The program started from 1 December to 2 December 2022.

Old Mutual Zimbabwe shared an in-depth lesson on financial education through its ‘On The Money’ program at the Old Mutual offices and the contestants also had the chance to meet Mr Mashinya.

“I didn’t know that learning about finances can be this fun and easy to understand. I will teach my fellow peers in school and share the free materials availed by Old Mutual” said one of the participating students.

After the training and motivational talk, the students were given an exclusive tour of the Mutual Garden Solar Farm. Some students commented that it was their first time in the capital and couldn’t wait to get back home and let their friends and family know about their experience.

Day one ended with inspiration and imparting of historical knowledge to the students.

They were taken on a trip to explore the Museum of African Liberation.