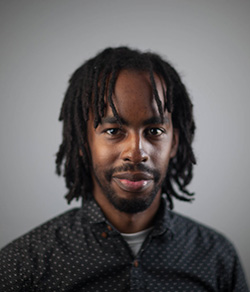 Chris Mountford talked to London-based rapper MARK JOHNES with a radical vision to take his music to the people
LONDON based rapper Mark Johnes has recently been getting Cross Rhythms radio exposure for his infectious “Static Change” track.
This isn’t the first time the Zimbabwe-raised emcee has made the heady heights of the CR playlist; back in 2015 his song “indifference” got some play. . . though then he was calling himself Baliva. I began my chat with the rapper by asking about the name change.
“I started out as Baliva around the time I became a Christian. I wanted a name that would help me to evangelise and share my faith so I came up with Baliva. As the last two or three years have gone on, I’ve had a strong desire to try different ways of expressing my faith, in more abstract ways.
“Not so much making a song specifically to evangelise but making a song that actually shows the other elements of being a Christian. Dealing with either stresses or joys. I’d already started writing stuff like that so my last album as Baliva, ‘Imperfect’, had a few songs like that. If you listen to a song called ‘Got To Go’, that was one of my first attempts to try something like that.
“And that song was about dealing with fear. A few months ago I made a joke with my wife, I’m going to go under my real name now. We sketched a logo and it looked right, Mark Johnes – I like that! It meant I didn’t have to live this dual personality. Who’s Baliva? Who’s Mark Johnes? It’s all the same. Maybe I’m just growing up, I don’t know.”
Mark was born in Zimbabwe in 1980, came and settled in the UK about 16 years ago. He explained how he became a Christian, “I was already sort of taking an interest in Christian things for a few years before that.

“But it was summer 2005, I was visiting a friend in Northampton and there was a live street performance and this rapper was rapping over an instrumental by an artist that I really love. He obviously wasn’t the artist but it was the song. But the lyrics were different, I was listening to the lyrics and it was all about God and I was like wow, this is amazing. I’ve never ever heard someone rap about God.Advertisement

“I’ve always heard mainstream hip-hop that’s just about partying, politics or whatever. That was the first time I’d actually heard someone live rapping about God and it inspired me. So I visited their church and became friends with a lot of Christians. I was at a time in my life when I’d just given up on everything around me. I just felt I wasn’t getting any satisfaction from everything I dreamed.
“Like I said, I’m from Zimbabwe and I thought when I moved to London I’m going to have all these electronic gadgets, my life is going to be great. I moved to London, I have all these electronic gadgets and it just doesn’t satisfy. I’m doing well at college but it doesn’t satisfy. And then I discovered God and that truly satisfied me. I felt so much peace and joy and I’ve been walking in that road ever since.”
Mark’s music making began when he was a teenager.
Dad former ZBC DJ
“When I was about 12 or 13 I first tried out playing the drums. My Dad was a radio DJ on ZBC Radio 3 so I tried to make a demo of me playing the drums. He was like, mmm, maybe you need to keep practising so I guess he didn’t like it.
“So maybe four, five years passed and I found rapping and recorded a few demos and gave them to my dad and he was like OK; he didn’t say much. The next day he booked me a studio session and I got to record my first professional single so I guess he liked it. That was 2001.”
In 2007 Baliva released a mini-album, ‘Resurrection’, and the following year the full-length ‘Sunrise’. But it was the ‘Imperfect’ album of 2015 which caught the attention of Cross Rhythms, the CR reviewer enthusing “The album continues to paint powerful musical and lyrical pictures (“Broken Home” and the powerful worship experience of “Worthy”). Jazz and soulful vibes fill the project (“I’m Okay”) but really it’s the soul and the vibe of Baliva that comes across alongside the love for the God of love.”

A year later came the “Static Change” single and the name change. Said Mark, “I’d been working on ‘Static Change’ since last summer and recording bits of it. I finalised it in February this year. ‘Static Change’ is, I guess, a paradox. A lot of times as human beings we want to change, we want to improve.
“But then, to be able to change you need to sacrifice something. Most of the time we worry about what people will think and most times people don’t necessarily want things to change. So you kind of get stuck between this wanting to change but people wanting you to stay the same.
“The song is really exploring the pain of that. For example, a lot of the first verse was talking of when I became a Christian, the sort of trials I went through, wanting to change to become a believer.
“Then the second verse is a lot about me going through this change now where I want to be different in how I approach my music and the challenges and the fears that come with it. So I don’t know if that summarizes it for you but I think it takes a lot of courage to change, whatever that is in your life, and God gives you the strength to do it. That song was my way of expressing that.”
On his website Mark calls his music hip-hop with a hint of jazz and soul. I asked the rapper why that fusion? Was it because of his background and growing up and the kind of music he was listening to?
Responded Mark, “A combination really. Back in 2005/2006 I was making loads of songs in different genres and I remember somebody coming up to me and saying you’re a soul guy, you’re really heartfelt in how you do your things. It never really made sense to me. And I think with hip-hop, what’s popular tends to be the very aggressive, bravado, hard beat type of hip-hop which sometimes throughout my journey I’ve tried to do because it’s what people may enjoy more.
New single every month
“But as I’ve got older I’ve tried to experiment with things that I really love. Alluding to what you just said I grew up listening to a lot of soul. My dad used to play a lot of ’70s soul, ’80s disco. And then personally I took an interest in jazz as well. So these are the sort of favourite things I’d listen to when I’m not recording or performing. I listen to Nina Simone, Teddy Pendergrass, all these kind of soulful artists, and I’ve always wanted to incorporate that into my music. So I thought, let me try it out and ‘Got To Go’ is one of the first real attempts for me doing that. ‘Static Change’ as well.”
Mark now has a plan to release a new single every month. “I’ll be exploring different topics, playing around with different beats and styles within the jazz/hip-hop feel and then giving it away free so particularly people outside of the UK and the US can enjoy it.
“The goal is giving it away free through my email mailing list and the hope is to inspire the world, give people a sense of hope wherever they are in the world and courage and freedom. I think music really helps people feel that, really helps bring healing. Through the spiritual strength I get from God I feel that it’s given me the ability to do that. One song a month is a good goal for me.”
Mark is working with a number of independent producers. He said, “One of the main guys I’m working with at the moment is called Tone Jonez, he’s out in America; another one from America under a similar name is Tony Stone. It tends to be between the States and Germany, the people I collaborate with.”
Mark has two or three singles already set for release. He enthused, “One is produced by a UK producer, a guy name Phil Mayers. He made this for me about five years ago so I’m getting ready to work on that one now. I have a lot of beats that have been sitting in my computer for ages. So in the next few weeks you should see it show up on social media or hopefully Cross Rhythms Radio.”
This article is taken from crossrhythms.co.uk.