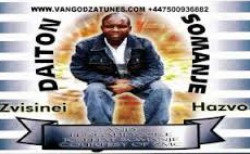 AS musicians, promoters, journalists and people from all walks of life across the country, converged at Marondera cemetery on Thursday to bury Daiton Somanje, the residents of the sleepy town felt the heaviest blow of losing one of the country’s finest Sungura stars.
Somanje, a co-founder of Pengaudzoke with his young brother, Josphat, died at Parirenyatwa hospital on Tuesday after battling with menengitis for some weeks.
Like his young brother, Josphat, Daiton was a gifted musician, guitarist and song writer and in Marondera he was treated like a hero.
News of Somanje’s death started circulating in the town last weekend and the family and fellow musician, Sulumani Chimbetu had to dispel the rumours.
However, the Tsaona hit song musician died on Tuesday aged 47.
Despite the earlier speculation on his death, sorrow and shock hit the residents of Marondera where the musician grew up and stayed for the better part of his life.
The death of Daiton is a big blow to Marondera as the musician and his brother had made the town proud with the launch of the group, Pengaudzoke in the late 1980s.
Pengaudzoke, as a group, became an instant hit and a household name in the town and surrounding farming areas where they mostly performed during weekends churning out popular songs such as Kwatakabva Kure Nenhamo, Seiko Kuonda, Zvibate Pamhaka and Tsaona.
“The death of Daiton is really sad news for us in Marondera because it is the first Sungura musical group that made Marondera a household name in terms of entertainment,” said Solomon Nyakabawu, a former Cold Storage Commission employee, who said he used to attend every show held in the town by the group.
Residents of Rusike suburb where the renowned musician stayed with his family said that although they knew that the musician had been unwell for some time, they had hoped that he would recover and go back on stage again.
“It is really sad news to hear about his death as Somanje had made Marondera to be a well-known town in terms of Sungura,” said Simon Tunga of Rusike.Advertisement