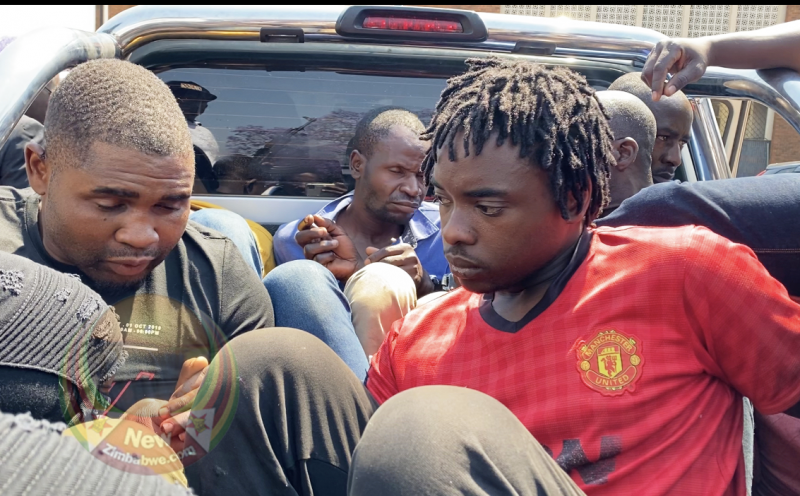 Police say they needed time to carry out investigations and were given up until Friday to do so by the court.

Detective Chief Inspector Alexander Jachi, who is in charge of CID Homicide Harare, said cops needed an opportunity to thoroughly investigate a string of robberies and murders across two provinces linked to accused persons.

“Time is needed to facilitate the recovery of the stolen property. There is need for time to allow the accused person to make indications on how they committed the offences of which offences were committed across two provinces.

According to a police affidavit, the assailants broke into the now deceased Chimoka’s house and demanded cash from him and his wife, before stabbing the former with a spear.

“The accused persons used an unknown object to force open the kitchen stable door to gain entrance into the house.

“The accused stabbed the now deceased on the left side of the chest just above the nipple with a sharp object,” read the affidavit.

At Chimoka’s residence, the seven suspects reportedly split themselves and separately terrorised occupants of the house, including one Joseph Chigodora, who was left nursing head and back injuries after he was beaten using unknown objects.

The gang also stole an iTel mobile phone and US$10 allegedly from a house helper.

Following a tip off, according to the affidavit, detectives proceeded to house number 16 Churchill Road, Marlborough, Harare.

“Upon arrival detectives mounted the cortege, identified themselves as police and ordered Josephat Muchenje to surrender himself,” reads the affidavit.

Whilst the police was conducting a search at Muchenje’s house, where they recovered two cutting discs, Bright Magodhi arrived and was immediately apprehended.

After being interviewed, Muchenje and Magodhi implicated Kado, Dapi and Mudzangairi as their accomplices.

In movie style act, police used Muchenje and Magodhi to lure Kado who was apprehended at the footbridge along Julius Nyerere in the Central Business District (CBD) of Harare. He then indicated that he was a police officer on suspension stationed at ZRP Rhodesville.

Further follow ups were made leading to the arrest of Dapi and Mudzangairi, at Total Service Station at Corner Samora Machel Avenue and Chinhoyi Street in Harare.

Goods recovered included an SQ cell phone recovered from an abandoned Toyota Fortuner that was left by the accused persons and was part of the property which was stolen at Rakodzi School in Marondera.