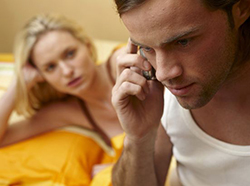 THE technological revolution that gripped humanity a few decades ago has not only transformed our way of life but has also essentially brought a lot of misery, anxiety and uncertainty in the way we relate to each other. Technology has in some specific ways been partly or wholly blamed for the demise of many marriages and relationships.
According to Sarah Griffiths from the MailOnline, most youngsters today are ‘in love’ with their smartphones and a great deal of women admit technological devices are ruining their relationships, Psychologists from US universities claim that smartphones can be the ‘third wheel’ in a relationship and distract couples from each other.
Many women in developed western countries and indeed in developing countries believe that smartphones are invariably interfering with their lives directly and indirectly. There has also been research evidence from both men and women suggesting that their partner has texted during an important conversation or romantic activity, thereby putting a strain on their relationship.
There are also growing concerns especially in developed countries that predominantly use technological gadgets such as smartphones that if you are emotionally attached to your smartphone and rely on it every minute, it may be destructive to your relationship in multifarious ways. Smartphones, it is argued, have created a generation of phone addicts whose allegiance in a relationship has increasingly shifted from their partner to the smartphone or social media once every couple of minutes.
Some people are so addicted to their phones to the extent that they go for a bath with them, they cannot risk putting them down unwatched and sleep with their phones under their pillows. Essentially, this love affair with smartphones is getting worse and more complicated. In most marriages, the smartphone is the biggest source of tension and partly responsible for marriage failures and relationship breakdowns. Smartphones are becoming more destructive to relationships than girlfriends or small houses as they are called in Zimbabwe.

.
Scientists have also found that what they describe as ‘technoference’ and its impact on relationships. This is when an email or text message draws attention away from partners being together, maybe even when romance is blooming, in the middle of an intimate moment or when someone just keeps checking a device during dinner or church service. These tech moments are increasing between partners and are making couples anxious and putting relationships under constant pressure due to suspicions of infidelity or lack of trust.Advertisement

Brandon McDaniel and Sarah Coyne who just published findings from studying “143 married/cohabiting women who completed an online questionnaire” defined technoference “as everyday intrusions or interruptions in couple interactions or time spent together that occur due to technology.” What’s most important is that technoference—despite the fancy name and graceless definition—is routine and every day (Forbes Online).
Some partners are known to compose texts during face-to-face conversations without shame or respect for the other. This propensity has led to people becoming trapped in ‘gadgetry culture’ by allowing technology to interfere, even in small or petty ways. This sometimes causes conflict, which slowly erodes the quality of their relationship and keeps them increasingly apart.
In due course, individuals may feel less content with their relationship as well as with their way of communicating with their partner. Technological interference with conversations, activities between romantic partners even when it’s inadvertent or for brief moments may lead to conflict and negative outcomes in personal lives and relationships.
Prof Sue Johnson, Alliant International University in San Diego, CA, argues that while it is widely appreciated that technology helps us understand how relational we truly are, the basic currency of social connection — face-to-face interaction and simple conversations between partners or loved ones are increasingly becoming marginalised in all areas where smartphones are in use.
Those that are addicted to smartphones are not only accused of infidelity, but engaging internet pornography, online gaming and gambling, which all have a negative strain on relationships. It is also argued that while electronic gadgetry is keeping us more connected in some ways, it is a shallow connection not the deep emotional engagement needed for any kind of meaningful relationship.
The constant use of electronic gadgetry is bad for marital relationships, due to the fact that texting, use of Facebook, WhatsApp, Twitter, Snapchat, and e-mails are set up for volume, velocity, and multitasking, that is, the splitting of attention between couples. Smartphones are therefore not recommended for optimum use in a marriage or romantic relationship setting; their use should be minimal and controlled to avoid unnecessary interference with personal communication, marriages or relationships.
Smartphones, experts argue, create an illusion of connection which cannot be a replacement for face-to-face personal connection that marriages and relationships thrive on. The danger, though is that they also create a new way of relating with each other, in which we are continually in touch but emotionally detached from each other. Marriages and relationships therefore become more of formalities that meaningful unions per se. The more the technology advances the more impact it has on already strained relationships.
Researchers have also found that constantly checking for messages is an addiction which like other drugs can ruin your personal relationships. The addiction has even been given a name – Nomophobia is the term created by British researchers in 2008 to identify people who experience anxiety when they have no access to mobile technology. A previous study showed that young people are now so addicted to their mobile phones; it feels like they have lost a limb when they are without them. Most youngsters now prefer the use of smartphone that spending time in a physical activity or local library.
Strategies for managing technology and avoiding marital/relationship ruin

In conformity with gadget etiquette, some have recommended a number of strategies which include: putting a smartphone on silent and not keeping it with you all the time in order to focus on your partner and show them you value them more than the smartphone.
If one needs to ‘check on something’ legitimately important, one can openly provide an explanation first and then check their phone preferably after an important conversation or intimate activity. This is not easy to do but may be the only way to avoid technology needlessly coming between you and your relationship thereby avoiding jeopardising the all-important marriage or relationship.
It is also recommended for one to avoid getting irate or defensive if your partner expresses discontent at your constant texting or gaming.
Essentially, one must always try to put away one’s smartphone for a while and pay some special attention to your partner during important conversations or romantic sessions. This is a way of saying to your partner you value them more than the smartphone and you are giving them the time and special attention they deserve every day.
One should use the smartphone when their partner is busy doing other things or when they are not looking or seeking your attention. This is difficult to achieve though but is the most desirable action to take. It is saves and maintains the relationship intact for a while at least.
Promote open communication with your partner, with special focus on areas that could cause tension and friction. Some experts advise that in a long term relationship, transparency can develop so easily between partners — one person needs another’s smartphone passcode to grab a number, or email password to look something up. But having that information can open a Pandora’s Box or potential can of worms.
Create daily technology-free times where no smart phones/tablets are allowed at the dinner table, during important conversations and in bed and this guarantees undivided attention to each other for a couple of hours per day. This also fosters the emotional presence for a relationship, for intimacy to take hold and develop over time.
Go for a weekend away without smartphones and only focus on your selves just for the few days you are not at home, this helps to rekindle the relationship and create a sense of belonging to each other as partners. Again, this is not a panacea for many in relationships.

Facebook behaviour
Avoid Befriending your spouse and sharing your relationship status on Facebook as this is a no-brainer, don’t be friends with exes, don’t post anything that can be misinterpreted, support each other online, but don’t let it replace how you communicate, be clear about your relationship status on Facebook, avoid using ‘it’s complicated’ when describing your relationship status. You should be able to defend each and every friendship you have on your Facebook to your partner when asked.
A 2010 survey by the American Academy of Matrimonial Lawyers (AAML) found that four out of five lawyers reported an increasing number of divorce cases citing evidence derived from social networking sites in the past five years, with Facebook being the market leader.
Two-thirds of the lawyers surveyed said Facebook was the “primary source” of evidence in divorce proceedings, while MySpace with 15% and Twitter with 5% lagged far behind. Photographs harvested from social networking sites – including those posted by friends or colleagues on their own pages – are a particularly rich source of damning evidence, according to divorce lawyers.
In conclusion, technology has brought about an era of efficient and smart communication between organisations and people and it has largely made our lives much easier than before. Conversely, technology has also brought a lot of misery to our lives; it has ruined relationships, marriages and corrupted emotions in the most grotesque of ways.
However, it has to be acknowledged that technology like globalisation, is now an inevitable part of our lives and the best we can do is to embrace and carefully manage aspects of it that make our lives uncomfortable. It is conceivable the worst effects of technology on people’s relationships and marriages are yet to come. Interestingly, a new era of technological counselling is looming as the victims of technological advancement are on the increase following the demise of many marriages and relationships in today’s super tech society.
The writer is Crisford Chogugudza, based in London, United Kingdom. He can be contacted on crisford02@yahoo.co.uk