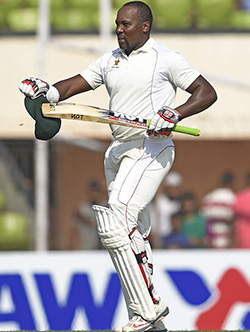 Zimbabwe 331 for 5 (Masakadza 154*, Chakabva 75*) trail Bangladesh 433 by 102 runs
Hamilton Masakadza’s unbeaten 154 powered Zimbabwe to a position of strength on Wednesday (November 5), the third day of the second Test against Bangladesh.
The day belonged to Zimbabwe as it added 278 runs to its overnight total of 53 for 1, for the loss of just four wickets to finish on 331 for 5.
Masakadza’s knock helped Zimbabwe, now just 102 behind the host, keep the game in the balance.
Masakadza received ample support from Regis Chakabva, the wicketkeeper, with whom he has so far added 142 runs in an unbroken sixth-wicket stand. Chakabva remained unbeaten on 75.
Luck favoured Masakadza as he was dropped on three separate occasions, on 15, 19, and 74. Shamsur Rahman was the culprit each time.
Chakabva was also offered a reprieve when Mushfiqur Rahim, the captain, missed a stumping chance with the batsman on four.
Zimbabwe made the most of it as Masakadza struck 17 boundaries and two sixes, while Chakabva struck ten boundaries to punish Bangladesh.
Earlier in the day, Shakib Al Hasan picked up three crucial wickets as he sent back Brendan Taylor (37), Craig Ervine (17) and Elton Chigumbura (1) in the post-lunch session to leave Zimbabwe tottering at 189 for 5. Thereafter, it was Zimbabwe’s show all the way.
The third Test between the two will be played in Chittagong from November 12 to 16. The Tests will be followed by five One-Day Internationals.