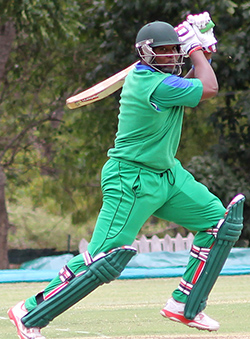 Mountaineers – 185 for 4 in 20 overs (Hamilton Masakadza 88, Kevin Kasuza 41; Prince Masvaure 1/18, Tendai Chisoro 1/31)
Mid-West Rhinos – 133 all out in 19.3 overs (Tarisai Musakanda 41, Peter Moor 31; Donald Tiripano 3/27, Hamilton Masakadza 2/8, Wellington Masakadza 2/18)
Mountaineers won by 52 runs.
NEWLY appointed Zimbabwe national team captain Hamilton Masakadza underlined his status as the country’s best batsman in the shortest format of cricket with a swashbuckling half-century that inspired Mountaineers to a 52-run win over Mid-West Rhinos in a domestic Twenty20 match played at Bulawayo Athletic Club on Tuesday morning.
After the Manicaland provincial side were asked to bat first, Masakadza – currently sitting on number eight on the International Cricket Council’s T20 batting rankings – and his opening partner Kevin Kasuza wasted no time getting down to business on their way to an 89-run stand for the first wicket in 10.4 overs.
Kasuza fell for 41, off 31 balls and including five boundaries and one six, when he was stumped by wicketkeeper Peter Moor off a Graeme Cremer delivery.
Vusumuzi Sibanda came in but could only manage a single run before perishing to the third ball he faced, caught by Tarisai Musakanda off Prince Masvaure’s bowling.
As Mountaineers sought to up the run rate, Timycen Maruma could only contribute 22 runs before edging a Tendai Chisoro delivery into the safe gloves of Moor.
In the meantime, Masakadza continued punishing anything full, short or wide until he was dismissed by Neville Madziva, just two balls before the end of the final over, having amassed an impressive 88 runs – including seven fours and five sixes – off 58 deliveries.
The national skipper’s younger brother, Shingirai Masakadza, contributed a 17-run knock, finishing unbeaten together with Roy Kaia who only faced a single ball and did not get off the mark as Mountaineers exhausted their 20 overs on 184 runs for four wickets.
In reply, Rhinos suffered an early setback as they lost Bothwell Chapungu and Masvaure for five and two runs respectively inside the first five overs, with Donald Tiripano gladly answering for the double damage.Advertisement

They were dealt another massive blow 14 balls later when Moor, who scored 31 runs off 21 balls, was trapped leg before wicket by Wellington Masakadza with the last ball of the seventh over to leave the innings wobbling at 45 for three.
Rhinos skipper Sean Williams was not even given time to get into belligerent form, only managing six runs from as many balls as the match slipped away for the Kwekwe-based side.
The wheels seemed to get totally off when Remembrance Nyathi (two) and Malcolm Waller (one) perished five balls apart, while Cremer was dismissed for 11 runs to leave the scoreboard reading 85 for seven wickets, 13.3 overs gone.
Musakanda and Madziva tried to hold things together with a 44-run stand for the eighth wicket, but it was as good as all over when the partnership was dismantled in the 19th over.
First to go was Musakanda who top-scored for Rhinos with 41, then Chisoro was run out for zero, before Madziva was dismissed for 29, ending their attempt to chase down the target at 133 all out, with three balls remaining.
The Masakadza brothers were brilliant with the ball with Hamilton and Wellington claiming two wickets apiece, while Shingirai had to settle for one scalp.
Tiripano was, however, the pick of the bowlers for Mountaineers as he took three wickets, while Tapiwa Mufudza grabbed the other one.