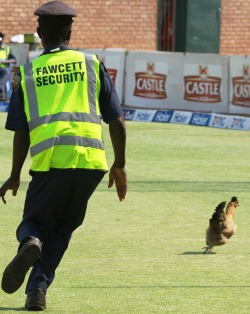 Zimbabwe 237 for 8 (Masakadza 75, Taylor 51, Junaid 3-55) v Pakistan
ZIMBABWE were 65 for two after 27 overs against Pakistan at lunch Tuesday as they sought to level the series in the second and final Test.
Hamilton Masakadza was the first-session star for the hosts, with his undefeated 43 including a six and six fours.
Captain Brendan Taylor won the toss on a clear, warm early spring day at Harare Sports Club and opted to bat.
Having studied the ‘green’ wicket with cracks down the middle, the No. 4 batsman believed it would be unwise to bat last.
Taylor missed the first Test as his wife was giving birth to their first child, and his return meant Sikandar Raza stepped down.
In a second change to a side that controlled the first Test for three days before losing by 221 runs, bowler Brian Vitori replaced Shingi Masakadza.
“We need to toughen up and put a price on our wickets,” said Taylor, referring to a second-innings collapse to 120 all out last week.
Pakistan kept faith in the first Test line-up as they sought a tour ‘hat-trick’ after winning both Twenty20 games and two of three one-day internationals.
Skipper Misbah-ul-Haq was unconcerned about losing the toss, saying it gave the home team a marginal advantage at best.
“Bowling first is fine. Zimbabwe do not have many spinners so even if we bat last, it does not matter.”
The hosts made a disastrous start with Tina Mawoyo out second ball for nought, caught by wicketkeeper Adnan Akmal off Junaid Khan.
A ball pitched outside leg went across Mawoyo and flew straight into the hands of Akmal, and Zimbabwe were a wicket down.
Rattled by the early blow, Vusi Sibanda and No. 3 Masakadza adopted a safety-first approach and runs were scarce initially.
The home side took 16 overs to pass the 30-run mark before Sibanda was out for 14, bowled by Rahat Ali.
Showing greater aggression, Sibanda prepared to pull, but got an inside edge and the ball struck the base of leg stump.
Settled Masakadza scored the first six of the Test off the third ball of the 19th over, punishing a Saeed Ajmal toss with a strike over deep mid-wicket.