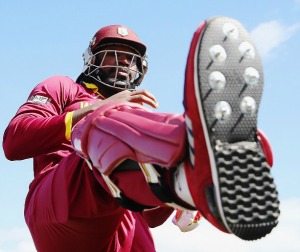 CHRIS GAYLE has been in terrible ODI form, with only one half-century in his last 19 innings, but he remains the West Indies batsman Zimbabwe are most worried about.
Gayle’s love of late-night loafing – something his social media accounts bear testimony to – have made him cricket’s version of New York: the man who never sleeps. His captain Jason Holder confirmed as much, albeit in a slightly more serious context.
“Chris is awake. I can assure you he’s awake. He was awake from the beginning of the tournament,” Jason Holder said. “”Every time I see Chris Gayle, I expect to see one Chris Gayle, and that’s a positive Chris Gayle. We still have a lot of confidence in him.”
While Gayle has been awake enough to enjoy feasts of jerk chicken and goat curry, attend karaoke parties, dance in reggae bars and do some bowling of the ten-pin kind, he has not been alert enough to contribute significant runs to West Indies. His last half-century came nine innings ago, his last century 19 innings ago, and his World Cup campaign has yielded just 40 scratchy runs so far.
Almost as scratchy as he looked during West Indies’ most recent outing in South Africa, where Gayle missed the Test series with a back problem, threatened with aggression in the shortest format and then fizzled out in fifty-over cricket. Local journalists began talking about another kind of c-word and questioned Gayle’s commitment to the Caribbean cause. Each time they did, Holder dismissed it as the wrong terminology for a man struggling for form, not desire.
Gayle’s interest in international cricket is a frequent talking point and it cropped again when the WICB president Dave Cameron retweeted a message from a fan calling for the Jamaican to be given a “retirement package,” because he “can’t buy a run.” Ironically, Gayle isn’t even on a central contract and is unlikely to qualify for benefits but Cameron apologised anyway and said there was “no offense intended.”
Could that be the alarm clock that wakes up Gayle up at the crease? Zimbabwe think it might be, with one of their players claiming the Jamaican has issued a warning in the hotel the team’s are sharing, but they hope it won’t.
“Chris Gayle isn’t firing at the moment, hopefully he doesn’t start firing against us in the next game,” Sean Williams said. “When he gets out, every team is happy to see the back of him, but playing against him is an opportunity a lot of people don’t get. I would like to get him out as fast as possible.”Advertisement

At the pre-match press conference, Hamilton Masakadza rejected any suggestions that Gayle was a diminished force, when a media person brought up his recent form.
“He hasn’t really played that well, like you said, in the recent past, but that doesn’t make him any less of a player,” Masakadza said. “I still think he’s a very good player, and I still think he’s their biggest threat.”
What Zimbabwe may not want to hear is Gayle’s record against them. He has scored more runs against Zimbabwe – 1317 of his 8921 – than against any other team, and averages a hefty 57.26 against them. He hasn’t played against them in almost five years, though, so they will hope he has forgotten how much he has enjoyed punishing their bowlers.
Even if Gayle’s memory is not rejigged, West Indies are not too worried about their chances of piling on a total. “Chris has been struggling and we are still scoring 300,” Andre Russell, the hero from their victory over Pakistan, said, “I just think when Gayle and Marlon Samuels peak at the right time, West Indies has the ability to score over 350.”
Holder went even further than that. “I guess when [Gayle’s] contribution comes, we’ll get somewhere close to 400 hopefully.” That would be enough to keep even the most drowsy spectators wide awake.