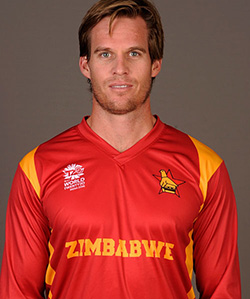 MALCOM Waller smashed an imposing half-century that powered Mashonaland West to a 47-run win over the Singapore Cricket Association (SCA) President’s XI in a Twenty20 match played today in the Malaysian state of Johor.
Mashonaland West are in Malaysia where they are scheduled to play three T20 matches and four 50-over matches against the Singapore side. The Zimbabwe provincial side will also face a Johor team in another 50-over match.
The tour got underway Friday with the T20 match against the SCA President’s XI played at the Johor Cricket Academy Oval.
After winning the toss and opting to bat first, Mashonaland West only had six runs on the board when Tinotenda Mawoyo, one of the senior Zimbabwe internationals touring with the provincial side, was dismissed without scoring after facing three balls.
His opening partner, Tarisai Mahlunge, went on to chalk up a 20-run partnership with Takudzwa Kaitano before the latter fell in the fifth over for 17 off 18 balls, a knock that included one six and a single four; 26 for two.
That brought in the experienced Waller to the crease who quickly asserted himself on the game as he and Mahlunge, who turned 29 today, added 28 before the birthday boy was trapped lbw by Anish Paraam in the 12th over; 54 for three.
He scored 19, including two boundaries, off the 25 deliveries he faced.
Just after the team hundred came up in the 17th over, Trevor Chibvongodze was dismissed having managed a run-a-ball 20 – his partnership with Waller had yielded a massive 46 runs.
Nyasha Mayawo came in with his intentions obvious, carting one over the rope and smacking another one to the boundary before he was run out having scored 12 off the four balls he faced; 120 for five.
With two overs remaining, Waller went for the kill, plundering 24 runs off nine deliveries before he was caught off the very last ball of the innings as he unsuccessfully sought to sign off with a maximum.Advertisement

With his impressive 72-run knock, which came off 47 deliveries and included nine fours and two sixes, Waller had done enough to put his team in control of the match as they finished on 148 for six.

Malcom Waller (Centre) gets the man of the match award