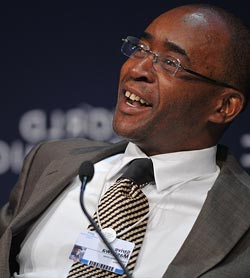 STRIVE Masiyiwa, the Chairman and Founder of the Econet Wireless Group, a global telecommunications service provider, is saving money and lives through Facebook which is one of the world’s biggest social network platforms.
The Econet boss shares very insightful and practical business information with his thousands of friends and followers all over the world who are using the same platform to testify on how their businesses and lives have been transformed through these business tips.
Masiyiwa’s Facebook initiative of sharing business insights on social media has multiple mutual benefits to him and his followers in that his tried and tested ideas are helping many emerging entrepreneurs to run their business professionally and successfully to the benefit of their families and communities.
With the cost of attending business schools and employing professional employees being a challenge for most small-to-medium enterprises, it has actually been cheaper for a number of people to just log onto social media and get this valuable information.
Although Masiyiwa’s Facebook posts are not intended to replace formal education in business studies, they are however, more practical and usable, especially considering that they are coming from real life scenarios spanning across continents.
One of the advantages in this development is that the enthusiastic and emerging entrepreneurs can then compile and keep these insightful posts so that they can read and refer to them at their own time.
Research on the success and failures of small to medium enterprises has proven that over 50 percent of emerging businesses fail, with lack of knowledge by the proprietors to make informed decisions in their operations being cited as one of the most contributing factors.
Having over 400,000 likes on his Facebook page which translates to an average of 15,000 likes and 2,000 shares per post, Masiyiwa, a confessed Christian, has become one of the most formidable marketplace apostles who are practising their faith through works.
This development means that an increase in profitable business activities through these inspired posts is likely to bring about a general increase and improvement in the standard of living which will in turn creates a healthy future generation and a stable society.Advertisement

A healthy, informed generation and stable society is then also likely to be preoccupied with productive activities in a way that guarantees peace, order and security as compared to people who become frustrated by failures in their communities.
Business failures, especially by emerging entrepreneurs, are dangerous to the economy in that they result in stressed and hopeless individuals whose health is greatly threatened. Frustrated and hopeless people adopt the law of the jungle – which is survival of the fittest tactics – in their day to day living and thus doing away with morals and mutual respect for fellow human beings.
A society of stressed, hopeless and sickly people is likely to succumb to poverty which will in turn result in chaotic scramble for the available limited resources and this is the major cause of instability especially in poor and undeveloped countries.
Masiyiwa can, therefore, benefit from his noble initiatives of sharing business insights in that he is helping to raise a generation of inspired productive and progressive individuals who will not end up being a security threat to his global empire through instability that can undermine business operations in any country. Instability results in the ruthless loss of precious innocent lives and the destruction of valuable infrastructure in most societies as a result of scrambling for scarce resources.
Therefore promoting productivity through practical business insights is likely to bring peace and development in the community which in turn results in considerable savings in money and precious human life. The other benefit is that a productive and progressive community contributes is that the people stand as potential customers to his business initiatives and thus creating a mutually beneficial relationships.
Masiyiwa has been honoured and recognised in various platforms for his outstanding contributions in business and humanity initiatives. According to the Econet Wireless website, Masiyiwa has been recognised with awards in Builders of Modern Africa (2010), 20 Most Powerful Business People in African Business (2011) and was invited by President Barak Obama to attend G-8 Summit at Camp David in 2012. Econet Wireless’ business interests include telephone services and Information Communication Technology networking infrastructure with operations in Africa, Europe, South America and the East Asia Pacific.
Brian Kazungu is a christian, media practitioner, IT administrator, entrepreneur, an opinion leader. He can be reached at kazungu.brian@gmail.com, Twitter @BKazungu