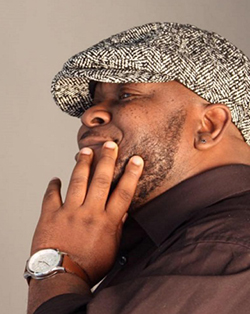 MASKANDI music aficionados in Zimbabwe and beyond who have for a long time been starved of rich and fulfilling melodies would find Vusa Mkhaya`s latest album enriching.
Mkhaya, who is currently based in Austria where he is part of the renowned Acapella trio, Insingizi, has released a new offering titled, Manyanyatha.
The title track, Manyanyatha, which is accompanied by a video, has become the favourite of many, with fans around the world, including fellow musicians, doing their own renditions of the song under the hashtag #ManyanyathaChallenge.
Mkhaya, told NewZimbabwe.com that the album, his third offering, narrates his personal life journey.
“It narrates my life story as a young boy under the watchful eye of my grandmother,” he explained.
“Most Zimbabweans and Africans can relate to the role of the extended family and having powerful matriarchs run the family.
“Even though my grandmother was illiterate, her wisdom was unquestionable and vast, and helped shape my life and the man I am today.”
Mkhaya said the album which is infused with traditional Ndebele sounds, folk storytelling, Afro jazz and contemporary soft rock influences, captures the sounds like those from Johnny Clegg and Savuka, Youssor N’dour, Salif Keita to name a few.
Some of the songs in the album include Siyeza, Lalela, Lizobuya, uthando, among others.
The title track Manyanyatha can be said to be a prophetic nickname given to Mkhaya by his uncle Roger Mabhena, who spotted the musical talent of the then toddler, who would become energetic, dance and sing to every song sung.
Lizobuya meaning The Return, is a song that continues Mkhaya’s story, and narrates the hopes of one day having the land and freedom returned to the people.
Siyeza is a melancholic song rigged with deep emotion of loss. Written after he lost his beloved mother, he narrates and consoles himself through this song, as he speaks to his mother, asking her to advise the ancestors and those that are departed, to help prepare a place for him as one day he will join her and them.
“This is a song that anyone who has lost a loved one can relate to as you yearn for them and have the hope of joining them one day,” says Mkhaya.
He said the album will soon be available on various online music stores.Advertisement