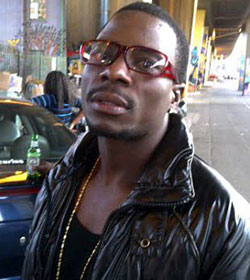 FOUL mouthed rapper Alishias Maskiri Musimbe has joined the bandwagon of musicians who are following the ‘great trek’ to Prophet Walter Magaya’s Prophetic Deliverance Ministries.
He made his maiden performance at the church in Waterfalls (opposite Zindoga shops) last week and was given a rapturous response.
Maskiri has penned a praise song entitled Mnandi in which he showers praises at the PHD Ministries and how it has managed to transform people’s lives in typical from rags to riches fashion.
In one verse of the song, he ‘disses’ a former convert raunchy dancer Beverly Sibanda popularly known as Bev.
Maskiri accuses Bev of going astray after she left the ministry following a short stint which saw Prophet Magaya opening a boutique for her.
She however left PHD saying the church was not honouring what they had promised her when she joined. This raised eyebrows as to whether she joined the church for spiritual healing or for material gains.
In an interview, Maskiri said he had his ‘Damascene Moment’ when he realised that some of his close friends had transformed their lives after joining the church.
“Some of my friends used to have wayward behaviour but they are now living clean lives and you can clearly see that they have transformed in both their behaviour and way of life.
“I also noticed the charity work that the church is doing and I was charmed and I saw the light. The church is a sanctuary and that is why I chose to use my singing talent in church,” said Maskiri.
Bev refused to respond to the attack she received from Maskiri in the song.
“I will not comment on that issue,” she said.
Meanwhile, other artistes who have joined the PHD Ministries include Isaac Chirwa, Nicholas Zakaria, Taso among others.
Maskiri Ft Tererai and Natty Gee – naMwari