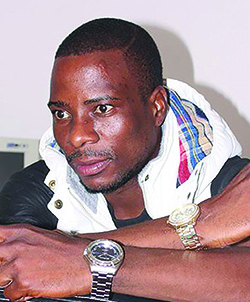 HE has always been known as the bad boy king of controversy and he has always lived up to his antics.
While there has been the high profile conversion to pastor Magaya’s PHD Ministries Church, controversy has continued to follow rapper Alishias Maskiri Musimbe, albeit in mild servings these days.
And now in his lattest serving Maskiri, currently on tour in the UK, has had a couple of jibes at many people as he has asserted his greatness as a rapper in the country.
While there are many lines that take a dig at people including Beverly Sibanda for being a gold-digger who has courted the church and ditched it in pursuit of fortune, Maskiri has had all these lines stay put in the single effort Musanyepere Vanhu.
And yet curiously one of those jibes has suddenly gone mute; it concerns a political figure.
Transport minister Obert Mpofu had his jaw jabbed by Maskiri in what he says was jest but the line has been erased in versions that are being played by the radio stations particularly the national broadcaster ZBC.
“Ndakabata Bulawayo saObert Mpofu,” Maskiri says in the line.
This is in apparent reference to the popularly held notion that Minister Obert Mpofu has bought ‘half’ of the buildings in Bulawayo and three quarters of Victoria Falls Town, which popular street jokes says should be renamed “Mpofu Falls”.
“Yes I have that line you know but it’s just from a joke and meant to just hit home a point that I am a popular figure even in the country’s second largest city,” Maskiri acknowledged in his trademark nonchalant monotone way.
And the nation found the line funny.
Evidently, someone high up in the rungs of censorship struggled to find the joke and as a result whoever wants to roll over in laughter has to get a copy of the single of their own to play in their own homes.
Still, for Maskiri, that gets the sales flying off the shelves!Advertisement