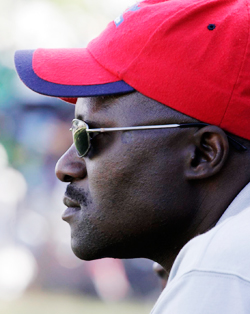 NOMADIC football coach, Luke Masomere has been appointed the new How Mine coach, replacing Philani Ncube who threw in the towel two weeks ago.
Masomere resigned from Mutare-based Buffaloes on Monday and travelled straight to Bulawayo where he was set to be unveiled on Tuesday morning by the gold miners.
Said Masomere: “I tendered my resignation today (Monday) and I am going to How Mine. I met their bosses last week in Harare and we discussed the job and I am happy that my ambitions match theirs.
“I would like to pay tribute to everyone at Buffaloes who made my stay welcome. I think I leave them in a good position and will be able to survive relegation.”
How Mine chairman Mlondolozi Nkomo said Masomere would be unveiled to the media on Tuesday, making him them third coach for the Bulawayo side in just under 18 months after Philani Mabhena and Ncube’s departure.
Buffaloes are currently on eighth position on the premiership standings with 29 points.
How Mine on the other hand, are lying 11th with 24 points, the same number of points with some teams in the relegation zone.
They now need to win at least four matches from the remaining nine to reach the magical 36 and avoid relegation.
They set themselves high standards last year in their debut in the top flight when they reached the final of the Mbada Diamonds Cup only to lose 3-0 to Highlanders.
The Bulawayo outfit still went on to represent Zimbabwe in the Caf Confederation where they reached the second round.