VP Chiwenga is battling an unknown ailment that has seen hands swell. He has, during previous public addresses, admitted battling a skin ailment.

Presidential spokesperson George Charamba has linked his boss’s mysterious health problems to injuries sustained during a bomb blast at a Bulawayo Zanu PF campaign rally ahead of the July 30 elections.

Last week, Charamba hinted the VP could be battling a worse off ailment, telling state media the former military chief had “very bad” stomach acids that threatened his health.

Charamba said the VP was now on “special diet” and has been advised to take a rest. 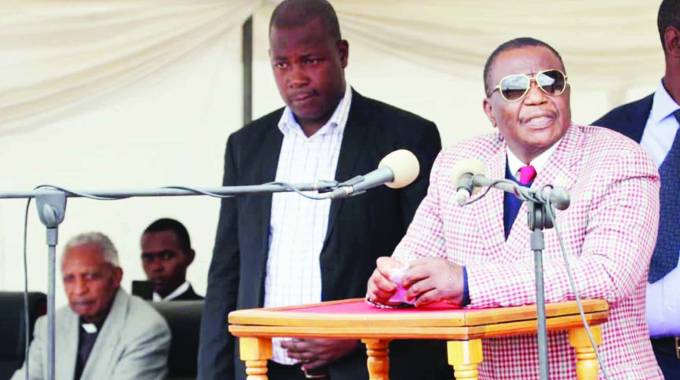 When the “thanksgiving” mass was held for him in Hwedza, the VP showed annoyance with prophesies of his imminent death with threats against “fake prophets”.

“There are others who are now calling themselves prophets,” said VP Chiwenga.

“There is this one called Talent. That should come to an end today…We don’t have that culture where one moves around attacking leaders under the guise of preaching the word of God. God does not say move around attacking other people.

“We want people to go to church and pray to God. This habit of using the name of the church to extort money is not good.

“How can you say that on the one hand you are practising Satanism and on the other you say you are a prophet, what kind of a prophecy is that? It’s not good and we don’t want that.”

Chiwenga’s rants follow “prophesies” by prominent Harare preacher, Apostle Thomas Chiwenga who said two important people in Zimbabwe will die in quick succession, something which will have an impact on the country’s future.

“I see two coffins, coffins that will bring this country to a standstill,” said the young preacher last month.

“People right now have people they have in mind that they think are dying, but I see people surprised, saying ‘we thought this one was in good health, what happened?’

In the same prophecy on Mugabe’s exit, he said his successor would be an interim leader and would rule for a “very short time”.