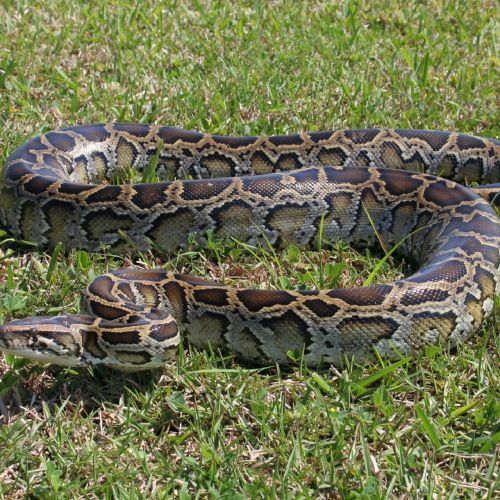 Spread This News
By Staff Reporter
KWEKWE Central Business District was Tuesday brought to a standstill after a huge live python was found stashed in a dumped Toyota Wish vehicle in a suspected case of rituals gone wrong.
Police had to be called in to disperse the crowd which  had gathered around the vehicle to catch a glimpse of the reptile which was later retrieved by rangers from the Zimbabwe National Parks and Wildlife Authority (Zimparks).
The vehicle, which did not have number plates, was being driven by an unknown male, who vanished into thin air upon realising his unholy stash had been discovered at a car wash in the city.
A witness, Munyaradzi Kashamba said: “We understand the driver had taken his vehicle to the car wash and he was accompanied by a female friend. It was one of the car washers who saw the snake and alerted the driver about the presence of the snake in the car. The driver and his friend simply walked off and abandoned the car as people came to catch a glimpse of the snake,” Kashamba said.
Another witness said the driver locked the vehicle’s doors and said he was going to call the Zimparks officials but disappeared for good.
“He just locked the doors of his vehicle and said he was going to get hold of Zimparks officials and never returned,” a lady identified as Tendai Chuma said.
The police and Zimparks rangers force open the door of the vehicle to retrieve the conscripting reptile for safe release.
“We suspect that this python is being used for ritual purposes. There is no way a such a big snake if it was an ordinary snake will find its way into a locked vehicle worse still the driver just disappeared leaving his vehicle,” another witnesses who was at the scene said.