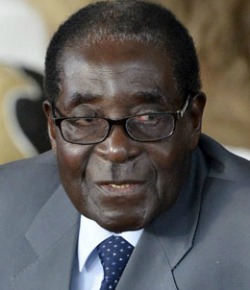 THE issue of succession remains one of the biggest problems currently facing Zimbabwean President Robert Mugabe’s ruling Zanu-PF party. This comes amid what has been described in the media as “chaos” and “fissures” within the party, as different factions position themselves for the eventual succession of the veteran leader.
According to media reports, there are two main camps dividing the Zanu PF party. One faction is linked to Vice President Joice Mujuru and another is reportedly led by Justice Minister Emmerson Mngangagwa.
Mugabe, who turns 90 next month, has been in power since independence in 1980 and as it appears, he is set to be Zanu PF’s candidate in the next election in 2018. This means that if Mugabe is still alive and wins the election, he will rule the country for five more years until 2023.
Many have asked why the succession issue has remained a “sensitive” matter as Zimbabwean leaders are not keen to discuss it openly.
News24 interviewed Zimbabwean political analyst Professor Eldred Masunungure.
News 24: The issue of succession continues to make headlines with the media highlighting what has come to be described as “chaos” within the ruling Zanu PF party. Many hoped President Robert Mugabe was going to address the issue during the party’s annual conference in December but he didn’t. Why does the party dread to discuss the issue? Why does it seem a sensitive issue to talk about?
Masunungure: I don’t think anyone is privileged to know exactly what reservations there are inside Zanu PF except those who are probably in the inner circle of that party and most likely the president himself. He must know what the dangers are for allowing the succession issue to take its course.
There is clearly a reluctance on his part and probably those around him to throw the succession issue open for debate even inside the Zanu PF party. So I think the conjecture is that the president of the party, who is also the first secretary of the party, is fearful. He is fully aware that opening the succession issue to public debate is going to spell the demise of the party, given the rampant factionalism in the party.
Presently, he is the only glue that holds the party together. It seems the factions are not seeing eye-to-eye and exit Robert Mugabe, the party may ride in a way that would spell doom for its future.Advertisement

News24: So what exactly does this mean? Are you saying there could be no Zanu PF without Mugabe?
Masunungure: I think it’s a matter of what happens if Mugabe is out of the equation in the party and of course what happens in Zanu PF has implications on what happens at the national level and what happens at regional level. So he [Mugabe] may want to stick to his position in the interest of the future of the party in the absence of a candidate that can play the same role of being the glue that binds the various factions together.
News24: You mention a very interesting issue that we know exists within the party, the issue of factionalism. What could be causing these feuds and divisions within a party that was once thought to be one of the strongest and one that upheld unity?
Masunungure: Well, factions are not a new thing. In many organisations we do have factions. It’s a natural order of organisational life but it depends on how those factions are handled and how they are managed. I think now both the main factions that we read about are aware that sooner or later the president will no longer be available, he will not be around forever.
So these factions are trying to strategically position themselves to take over when the opportunity arises, which can be anytime. The president’s age is such that he is of fragile verve and at that age they may think anything can happen suddenly. So they would like to prepare themselves to ensure that they are strategically located when the opportunity arises.