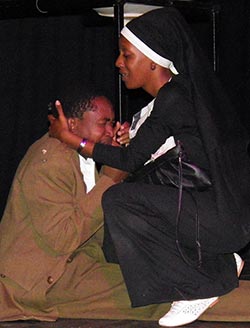 ONE of the National Arts Merit Awards (NAMA) nominated theatre productions, The Gods You’ve Built, is set to tour the Netherlands next month.
The play was nominated for the Best Theatre Production and Best Director but missed out on both awards.
The play has been invited to feature at the International Community Arts Festival (ICAF) which runs from March 26 to March 30 in Rotterdam.
In a letter addressed to the director of the play, Leeroy Gono, the Festival Director of the International Community Arts Festival, Eugene Van Erven expressed his interest in having the group over.
“It was a great pleasure to meet you and your group at the Isigcawu Festival in Durban,” wrote van Erven.
“I would very much like to become more acquainted with your work with an eye of possibly involving you more actively in one of our future events. For that reason, I would like to invite you for our next International Community Arts Festival in Rotterdam.”
Written by Tawanda Kanengoni and directed by Leeroy Gono, ‘The Gods You’ve Built’ is set over one night in an abandoned toilet.
Three people’s lives, (Brian – a professor, Rudo – a nun and Pamhidzai – a cop), converge in a tragic and tumultuous turn of events that leaves two of them dead and one changed forever.
The play opens with Brian, a University professor, pacing in an abandoned toilet mumbling a cryptic list of names.
He is then joined by Rudo, a Catholic nun, who brings him a handgun as per his request.
Before Brian can execute his plan, Pamhidzai, dressed in police garb enters the toilet seemingly drunk and looking for a place to relieve himself.
He instantly takes issue with the fact that Rudo is in the men’s room but only to the extent of thinking that she is there as Brian’s prostitute.
After helping himself, Pamhidzai notices that Brian has very elaborate tattoos of the Hindu symbol aum. As he tries to coax Brian into showing all his tattoos he discovers that Brian has a gun.
The characters in the play engage in a deep philosophical conversation about the purpose of life and the idea of God and whether there is such a thing as God at all.
“It’s an exciting development for us, Masvingo and Zimbabwe as a whole. It gives the impetus for showcasing and sharing our product and culture to the international world. We, however, are still looking for partners to assist with air tickets for our trip,” lamented Gono.Advertisement

The cast includes, Dereck Nziyakwi who has featured in many plays for Rooftop Promotions including “Wedding Day”, “Dependency” and “Heal the Wounds”.
Nziyakwi also performed in the April Theatre Festival in Zambia in a play titled “All Systems Out of Order” as well as appearances in several television, film and radio productions. He comes in to replace Khetani Michael Banda could not be able to make the trip.
He is ably supported by Precious Mudzingwa who plays the part of Rudo, a nun. Precious has massive acting experience ranging from television to stage.
Her stage work includes, ‘Eclipsed’ written by Danai Gurira and Directed by Zane Lucas (HIFA 2012); ‘Accidental death of an Anarchist by Dario Fo, directed by Zane Lucas (HIFA 2011); ‘Revolution Avenue’ by Musekiwa Samuriwo, directed by Leeroy Gono (HIFA 2010); ‘Zuva Crumbling’ by Wiina Msimati, directed by Zane Lucas and Leeroy Gono; ‘Invisible Prison’ written and Directed by Raisedon Baya among other plays.
To complete the cast, playing the part of Brian, a professor, is Leeroy Gono.