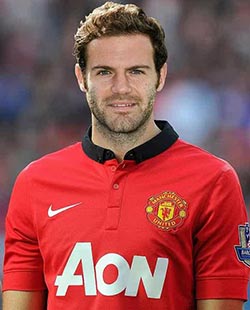 JUAN Mata has completed his move to Manchester United for a club record fee of £37 million.
“I am thrilled to be joining United,” said the Spanish star, who is expected to be given the club’s iconic number seven shirt, as worn by players including George Best, Eric Cantona and David Beckham.
“I have enjoyed some very happy years at Chelsea but the time has come for a new challenge. United is the perfect place for me and I am excited at the chance I have to be part of the next phase in the club’s history.
“Today is a very happy day… It’s a massive club and I feel very proud to be here.
“Chelsea is a top club and I have many friends there but you cannot turn down the chance to join Manchester United. I look forward to helping the manager and the team be successful in the coming years.”
The previous club record signing was Dimitar Berbatov, who United paid £30.75m for in 2008, and David Moyes was delighted to have landed a major transfer coup.
“Juan is one of the finest playmakers in the game today and it’s a real pleasure to have secured his signature,” said Moyes.

“He’s been instrumental in Chelsea’s recent success, with a notable 28 assists and 32 goals in his last two Premier League seasons.
“I have been impressed with the excitement he has shown to be part of the new Manchester United. I know our fans have admired Juan for some time now – he has always played well against us – and I know they will be delighted to see him in the red of United, starting on Tuesday.”
The deal marks a potentially huge upturn for Moyes, with news leaking on Saturday that Wayne Rooney is now set to sign a new contract worth as much as £300,000 a week that will keep him at Old Trafford for the rest of his career.
United had announced on Friday evening they had agreed a fee to sign Spanish playmaker Mata, who will cost the club £37.1m.
Mata arrived in dramatic fashion on Saturday afternoon as he stepped off a helicopter at Carrington to undergo his medical tests.
Predictably, Mourinho dismissed Wenger’s claims and launched an attack against what he thinks is Arsenal’s preferential treatment in the fixture list.Advertisement

“Wenger complaining is normal because that’s what he does all the time,” Mourinho said.