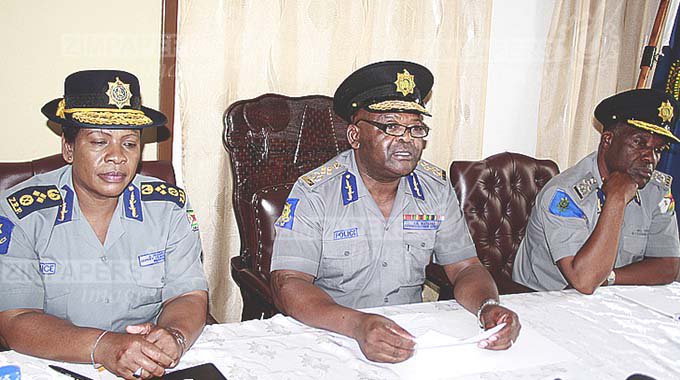 POLICE Commissioner General Godwin Matanga Friday tried to put on a humane face as he gave an account of the shooting and killing of two people by his subordinates in Thursday evening’s chaotic scenes he vowed police shall get to the bottom of.

This followed an unpopular Harare City Council ban on commuter transport within the city centre.

At a press briefing at the Police General Headquarters, Matanga said “it is with a heavy heart and sadness that I wish to announce the death of two people in a very unfortunate and regrettable incident that occurred on the 22nd of February 2018 in Harare Central business district.”

The police boss also confirmed four people were injured in the process, together with three police officers.

He said the law enforcement agency was in the process of investigating the cause of the incident adding that “perpetrators will be brought to book and there will be no sacred cows”.

“From the onset,” Matanga added, “let me categorically state that the Zimbabwe Republic Police is currently seized with the matter and I have since directed a team of expert investigators to extensively establish the cause, what transpired, who was responsible and action will be taken.”

The kombi ban directive was issued by the authorities in attempts to decongest the CBD.

However, Local Government Minister July Moyo Thursday afternoon abruptly reversed the operation which was roundly condemned by the opposition and civic groups.

In his briefing with journalists, Matanga said police teams which were partnering the Harare municipal police to enforce the unpopular directive were never informed about the reversal.

Giving the police account of the tragic events, Matanga said a team of Harare Central police officers was confronted by an angry mob armed with “stones, concrete pillars and rods”.

“The crowd started to throw stones at the police officers whilst demanding to know why they had earlier on dispersed them alongside Harare Municipal Police.

“The crowd advanced aggressively towards the police throwing stones and then police also fired one shot. The mob was not deterred.

“It was at this stage that police officers fired shots that unfortunately killed two people and injured 4 others.

“In the ensuing violence, three police officers were seriously injured, a police vehicle was severely damaged and two others were burnt.”

Matanga said police would “deal decisively” with those who continue to engage in acts of violence.

He said the bodies of deceased at still at Parirenyatwa Group of Hospitals Mortuary and appealed for public assistance in identifying the deceased.