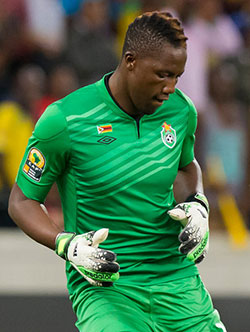 SOUTH Africa’s Polokwane City goalkeeper George Chigova was recently implicated in two match-fixing scandals involving the Rise and Shine and Zimbabwean national team.
According to the Zimbabwean media, Chigova along with teammate Lebogang Motumi were paid $15,000 and $10,000 respectively to ensure City lose to Bidvest Wits on January 22, 2016.
The Limpopo-based outfit were thumped 5-0 by the Students with Chigova in goal for Julio Leal’s team on the day.
However, Chigova has denied this allegations, according to Polokwane City’s communication manager Tumelo Makgoara.
“Well, he said that he is not involved with any match-fixing and never was and we as a club believe him because he said he is not involved,” Makgoara told Goal.
“He said he’s not been in contact with any of the match-fixers in Zimbabwe and we as a club take his word for it and if he says he is not involved there’s nothing we as a club can really say.”Advertisement