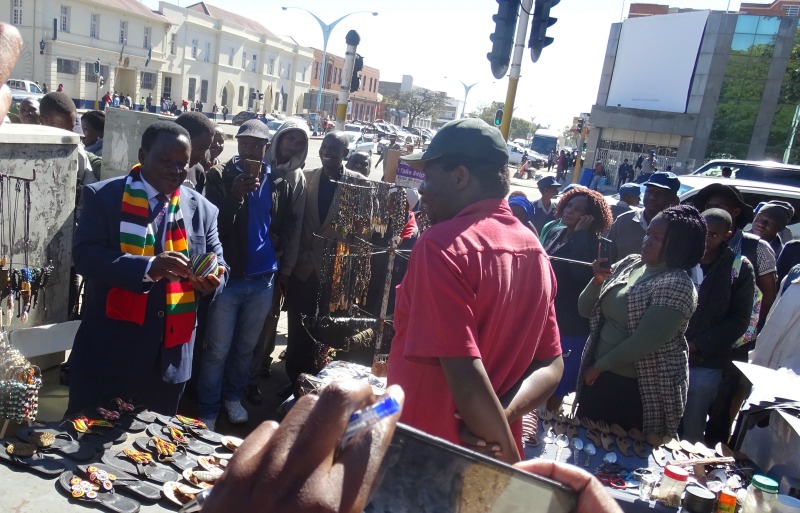 Zanu PF secretary for the commissariat Victor Matemadanda on Monday took time to visit and interact with some vendors, shop owners and ordinary citizens in Bulawayo over price increases.

Matemadanda, who is also the country’s Defence Deputy Minister, was accompanied by war veterans and some Zanu PF officials.

He began his interaction with vendors operating along Leopold Takawira Street.

He also visited curio sellers at the City Hall before visiting a few more of shops in the city including TM Hyper.

Vendors who sell their wares along Leopold Takawira near Econet building complained to the Zanu PF top official about the harsh economic challenges which they were facing.

“Things are very tough for us. We do not have electricity and water. Prices of basic commodities are also now beyond our reach. Please gadzirisai nyika,” said one vendor.

Davison Gomo, the secretary general of the Zanu PF aligned Coalition Against Sanctions, said Matemadanda’s visit was part of the commissariat‘s programme to appreciate the challenges facing ordinary citizens.

“The commissariat department has come up with this programme which is to interact with the people.

“We are listening to what the people are saying. This a national programme. We have been to Gweru and we intend to go to every place including the villages,” said Gomo who is coordinating the programme.

Gomo said there has been a general concern about price increases, electricity and water shortages throughout the country.

“The reason why we come up with this programme is that we do not want to scratch where it is not itching. We want to get the real problems which people are facing so that we can present them to the leadership,” said Gomo.

On Tuesday Matemadanda will visit Lupane under the same programme.