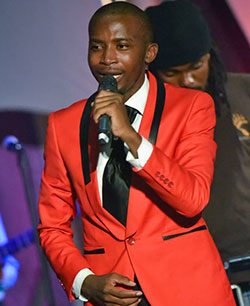 IN the midst of what is a thunderous storm that beggars answers of ‘who is Mathias Mhere’ right down to questions on whether he is a fraud, there is probably one shocking and all-so-striking thing to those who are calling him out to provide answers.
Who does man say the chap is? Just like his hero Jesus Christ of Nazareth who was thought to be a demon, or maybe simply son of the carpenter. One would think that since he is being confronted by maddening noise, he would come back to those questioning him with equal tenacity.
Instead, Mathias Mhere, (arguably) the current jewel in the crown of gospel music if his appeal and presence in the music charts is anything to go by, responds in an altogether different style.
“I know the questions asked of me in the media may be angering but I was taught by my parents to always be calm and level headed. That is why I answer everything respectfully,” Mathias says rather calmly.
He is quiet and only the sharp red shirt and ebony slight-fur corduroy slim-fit suit seem sharp and speak louder than the man himself.
He does not use the ear-splitting boisterous raucous that he is confronted with. This gospel singer instead opts for the voice of God, captured in the ‘still small voice’ with which God whispered to Elijah. His humility is striking.
This is Mathias Mhere. The successful gospel artiste who has made waves with an avalanche-like response to his album entitled Anoita Minana (Favour NaMwari) and subsequent current scorcher Nguva Yenyasha.
The former album, although released in September 2012, has continued to make several new entry breakthroughs into a handful of respectable music charts off the same album while Nguva Yenyasha, which has followed is now the unofficial anthem for gospel and non-gospel music lovers alike.
Mathius Mhere – Favour