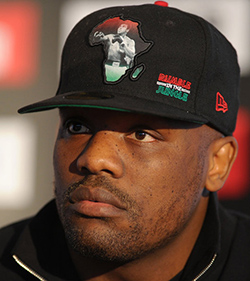 COACH DON Charles has said that Dereck Chisora’s more mature approach to boxing since becoming a father earlier this year has not softened the north Londoner’s desire to become heavyweight champion of the world.
If observers believe that Chisora, who fights Tyson Fury on November 29 at the Excel Centre in east London in a title eliminator, has lost his edge, then Charles has urged them think again.
“I’m not just a coach for Dereck. I’m his coach, I’m an uncle, I play the father role and he’s my brother. He draws a lot from me and the biggest achievement for him outside of the ring that I have always wanted is for him to come of age,” said Charles.
“The man you are seeing now is the man I’ve wanted him to turn into in terms of maturity and conduct. Think first before you act. Before, he used to do things erratically, off the cuff.
“He’s older now and he’s had a child so that can do a lot for somebody. He’s very calm but that doesn’t mean he’ll be like that when he gets into the ring, no, no.”
The winner of the British heavyweight clash will get the green light to take on WBO and IBF champion Wladimir Klitschko sometime next year.
Charles says with the stakes being so high it’s no wonder the pre-fight banter has at times been a little unsavoury. Both camps are distinctly aware of what lies ahead for the eventual winner and loser.
“Listen, the rivalry will always be there. They want what we want and vice versa, so there will always be tension,” he enthused.
“I see the fight going the same way I as when they were supposed to fight a few weeks ago. We will win the fight and we will win it by stoppage.
“I made the prediction against David Haye that someone was going to get stopped. I was hoping it wasn’t my fighter but I make the same prediction this time around and I don’t believe it will be us getting stopped this time.
“Obviously (losing) it is something that crosses your mind but as with any negativity you do your best to get rid of it, blank it out. I’m human so of course you think about that.
“But the way you approach the fight reduces the chances of not being successful. The wise man accepts and tries to correct the weaknesses they have, that is what we will be doing.
“We know they will be assessing our weaknesses and strengths but at the end of the day he (Fury) has too many flaws and we’ll be looking to exploit them.”Advertisement