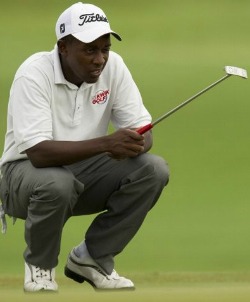 LESS than a month after turning pro in 2011, Nyasha Mauchaza tried to Monday-qualify for the PGA Tour’s Wyndham Championship in Greensboro, N.C.
Amazingly, stunningly, the Zimbabwean made it into the field, competing against such Hall of Famers as Ernie Els and Vijay Singh.
”All of a sudden, my lifelong dream of playing in a PGA Tour event was right in front of me,” Mauchaza said. “But I knew I wasn’t ready.”
Not so stunningly, Mauchaza missed the cut by 10 shots after rounds of 75 and 72.
While he pocketed no cash from the week, he earned something far more worthy than money: Experience.
”That week showed me what I needed to do,” Mauchaza said.
Fast forward to last week’s Florida Open at the Quail Valley and Orchid Island golf clubs in Vero Beach, Florida. Mauchaza, a Port St. Lucie resident, was near the lead throughout the 54-hole event.
He was tied with Tyler McCumber when they made the turn in the final round.
That’s when things turned disastrous for Mauchaza, who made a triple-bogey 8 on the par-5 10th to quickly fall three behind. It was the same hole he had eagled in the first round.
”I just made a bad swing,” Mauchaza said. “Everyone makes a bad swing, but mine just happened to come at a key moment.”
While McCumber quickly stretched his lead with four consecutive birdies, Mauchaza did something just as impressive: He rebounded from the “snowman” with three birdies on the final eight holes to finish second behind McCumber, two shots back, to earn a career-best paycheque of $7,000.
”It was a good step because I bounced back after that bad hole,” Mauchaza said. “I know I’m headed in the right direction.”
It hasn’t been easy for Mauchaza – his friends call him “Nash” – to break into the sport, not after spending the first 17 of his 25 years living in Zimbabwe. The golf world is not filled with a lot of great players from the African country.
Nick Price, who co-founded the McArthur Golf Club in Hobe Sound, is a Hall of Famer from there. Other top pros from Zimbabwe include Mark McNulty, Denis Watson, Tony Johnstone and Brendon de Jonge.
Mauchaza was the No. 1 junior golfer in Zimbabwe, but he admitted he received a jolt of reality when he played in the Orange Bowl Junior Golf Classic in Miami as a teenager.Advertisement

”I had no chance against those kids,” Mauchaza said, referring to many of the U.S. players who grew up in country clubs, learning the game from accomplished instructors.
But Mauchaza’s parents – both are doctors – believed their son had potential in the sport, so they moved from Zimbabwe to the U.S. in 2005. It wasn’t an easy decision because neither of his parents was certified to practice medicine in the U.S.
”My parents made a lot of sacrifices,” he said. “They saw I really liked golf. They let me chase my dream, but they made me finish college first.”
Mauchaza attended Towson University in Maryland, where he excelled on the golf team, being named the school’s Male Athlete of the Year as a senior.
During his junior year, Towson came to Port St. Lucie to play in the PGA National Minority Championship at the PGA Golf Club.
After he graduated, when Mauchaza was considering a place to move to concentrate on his golf game, he remembered the vast practice and training areas at the PGA Center for Golf Learning and Performance.
”I fell in love with the facility,” he said.
Mauchaza has become as constant a presence at the PGA complex.
”Day in and day out, he’s doing something to get better,” said Adam Dunham, an athletic performance specialist at the PGA Center.
“Even when he’s beat up, he’ll come in and just do regeneration techniques. He’s doing the little things that really add up.”
He’s also trying to understand his swing so, when things become un-ravelled during a round, he can fix it before things go awry. Just like he did after the 10th hole in the Florida Open’s final round.
”Golfers are famous for self-analysis,” Dunham said, “but Nash takes it to another level.”
Of course, Mauchaza seeks to take his game to another level. He wants to return to the PGA Tour and, this time, feel like he belongs.
”That is the plan,” he said.