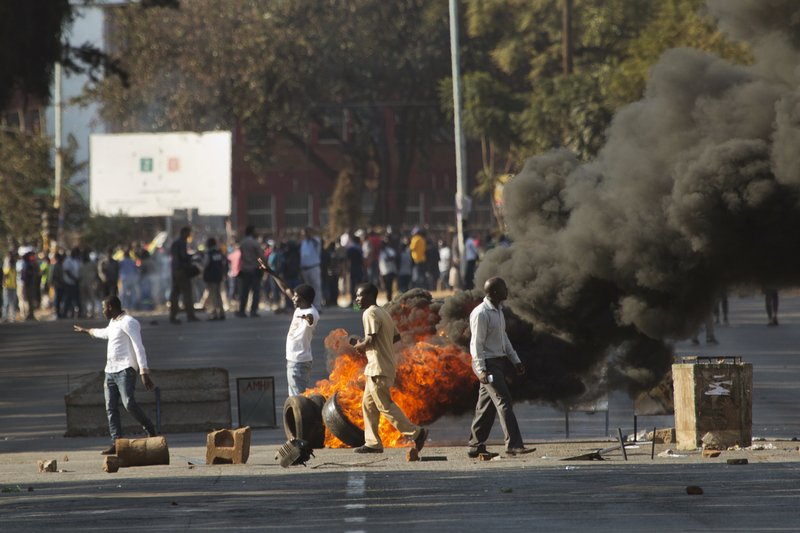 CENTRAL Harare was turned into a war zone late Wednesday afternoon as the military and riot police were deployed against opposition activists who were protesting against the results of Monday’s elections.

They were denied entry into the Rainbow Towers grounds by anti-riot police.

Agitated youths demanded answers as to where Zanu PF got the vote, insisting they voted overwhelmingly for Nelson Chamisa of the MDC Alliance.

At the adjacent Zanu PF headquarters, a haulage truck which had been used to display President Emmerson Mnangagwa’s campaign billboards had windows smashed by angry stone throwing youths while Mnangagwa’s billboard within the Zanu PF grounds was also vandalised.

In the heart of the city, rowdy youths were initially marching and singing up and down the streets close to the MDC-T’s headquarters while scores of others were gathered at the front of the building.

But the situation soon got out of control as some started blockading the streets, stopping vehicles and accosting their drivers and passengers.

A few of the protestors also tried to set on fire a banner of President Emmerson Mnangagwa on a building along Samora Machel Avenue.

The protestors later scattered as a military vehicle drove through the city centre at speed  with soldiers with soldiers firing their rifles.

It could not establish whether they were firing blank or live rounds but one of our correspondents saw a protestor lying in a pool of blood, badly injured from the waist down and looking unconscious.

His fellow protestors later bundled him into a vehicle screaming that he had been shot twice my soldiers.

Elsewhere, at the Zanu PF district offices along 4th street, three Ford Ranger vehicles were set on fire while armoured personnel carriers could be seen rushing through the city centre towards the ZEC base at Rainbow Towers Hotel.

After the military and riot police moved in with the later firing teargas the protestors cleared the streets and the city centre had returned to a nervous calm by early evening.

Commenting on the clashes, the United States embassy said it was “deeply concerned by the unfolding events”.

“We urge leaders of all parties to call for calm from members of their respective parties. We further urge the Defence Forces of Zimbabwe to use restraint in dispersing protestors.

“Zimbabwe has an historic opportunity to move the country towards a brighter future for all its citizens. Violence cannot be part of that process.”