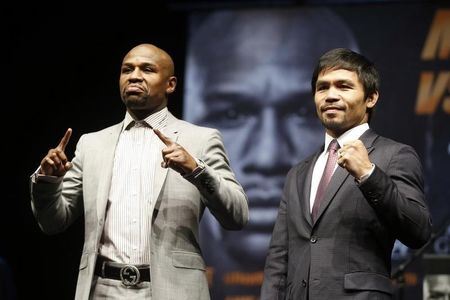 TICKETS for the megafight between Floyd Mayweather and Manny Pacquiao finally hit the market on Thursday and unless your name is Warren Buffet or Madonna you will probably have to watch the May 2 bout on pay-per-view.
After weeks of behind-the-scenes negotiations between the fighters’ camps and much speculation, the coveted tickets went on sale and, as expected, they were not cheap.
Prices on Ticketmaster ranged between $1,500 and $7,500 and those tickets were snapped up in a matter of seconds.
The MGM Grand in Las Vegas is expected to pack in close to 16,500 for the fight but estimates had only 500 to 1,000 tickets going on sale to the public with the rest earmarked for the two fighters, the casino, sponsors and promoters.
Within minutes of the tickets going public, the market place shifted to resale sites which posted knockout prices of $100,000 and more for ringside seats, putting them beyond the reach of everyone but the world’s most rich and famous.
Another secondary site, Ticketliguidator.com, was offering floor seats for $55,000.
“This is an extremely unique event for us, we haven’t ever seen this,” StubHub spokesman Cameron Papp told Reuters.
“The fact they are going on sale with the fight only nine days away is really unique and the fact there is lower inventory to the public is unique. That is being reflected in the prices right now.”

Stubhub, owned by eBay and the largest online ticket resale site in the United States, expects to see plenty of activity around the bout, leading right up to May 2.
Normally the market around a sporting event will see a drop in prices during the lead-up but Papp does not believe this will be the case for the Mayweather-Pacquiao bout.
“Being that this one is very unique and with the low inventory, right now I would expect prices to stay where they are or go up more,” said Papp, adding that sellers must show proof of ticket purchases before they are listed on StubHub.
“They are going fast and when the inventory gets lower, the prices are going to rise. Clearly people were waiting for this one to go on sale and watching the site. We’ve never seen prices sell that high.”Advertisement

The welterweight showdown between the undefeated Mayweather and the aggressive Pacquiao, the two best fighters of their generation, is expected to become the top-grossing prize fight of all time, pulling in close to $500 million in pay-per-view.
For those wanting to get in on the Las Vegas buzz around the fight, many casinos will hold closed-circuit viewing parties and part of that experience will also include high-end tickets that will run in the $150 range.