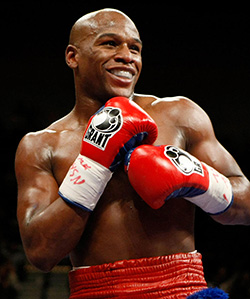 FLOYD Mayweather’s former fiancé Shantel Jackson has launched a multi-million dollar lawsuit against the boxing champion, claiming he attacked her multiple times and even threatened her at gunpoint.
In a press conference the model confirmed she was suing Mayweather for assault, battery, false imprisonment and defamation of character after years of domestic violence.
Jackson, who is currently dating rapper Nelly, claims that in 2012 the sportsman grabbed her arm before choking her.
The incident allegedly occurred shortly after he was released from prison after serving a three-month jail sentence for assaulting the mother of his three children, Josie Harris.
The suit, obtained by TMZ, also alleges he threatened to shoot her on multiple occasions including once in 2013 when he pulled out a gun on her during a heated argument, pointed it at her foot and asked, “Which toe you want me to shoot?”
Breaking down in tears, she also claimed that Mayweather, who is the world’s highest-paid athlete, last laid hands on her earlier this year at his Ritz-Carlton condo in L.A.
“I loved Floyd deeply but he continued to disappoint and intentionally hurt me. I have been embarrassed and humiliated more than I can ever imagine by Floyd whom I once called my best friend and fiancé.”
Jackson said that she decided to retain the legal services of celebrity attorney Gloria Allred after her former ‘best friend’ declined several opportunities to “do the right thing”.
She continued: “I have tried everything that I could and I have given Floyd every opportunity to do the right thing. Unfortunately, he has refused every opportunity to make things right.
“It is with a heavy heart that I finally realized that the only way to set the record straight to achieve justice for what he has done to me is through the filing of this lawsuit.”
The former lovers have clashed on several occasions since they called time on their romance in 2013.
The ongoing drama escalated earlier this year when he blasted her on social media and accused her of aborting their twins.
Sharing a picture of the alleged sonogram on his Facebook page, he wrote “The real reason me and Shantel Christine Jackson @missjackson broke up was because she got a abortion, and I’m totally against killing babies. She killed our twin babies”.Advertisement

Mayweather has not commented on the allegations.