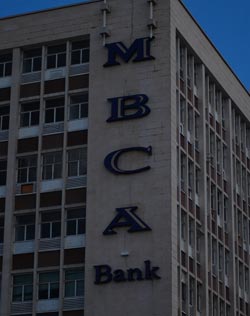 HARARE: MBCA Bank profit after tax for the six months to June 2016 slumped by 55 percent compared to the same period in the prior year to $1,2 million due to sluggish economy performance and low investments.
Revenue for the period under review marginally decreased by two percent to $14 million from $14,4 million. Capital stood at $42,7million and the bank said its on target to meet $100 million threshold by 2020.
Interest income dropped 12 percent to $8,7 million from $9,9 million due to lower interest rates on individual retail loans and interest earned from placements with other financial institutions.
Operating expenses widened by 15,6 percent to $12 million due to implementation of company’s Employees Share Scheme.
The bank’s administration expenses increased by 1.7 percent driven by bank’s expense management initiatives. Assets decreased by 8.5 percent to $219 million from $239,8 million in June 2015 owing to a fall in cash and cash equivalents and net loans and advances.
The bank’s cautious lending approach and fluctuations on its overdraft facility reduced loan book by 13 percent to $99 million from $114 million in the comparable period.
Non-Performing Loans ratio marginally increased to 6.7 percent from 6.5 percent as at December 2015.
The bank said its $75 million line of credit have been under utilised.Advertisement