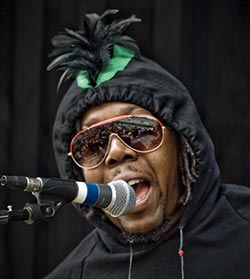 WHEN Tendai “Baba” Maraire was 25, his mother took the family to a Masvingo village where his family came from. Although Maraire grew up in the south end of Seattle, his ties to Zimbabwe country run deep.
When his father, Dumi, moved to the States, he taught ethnomusicology at the University of Washington and Evergreen State College and specialized in the mbira, the thumb piano that helps define the joyous, haunting music of the Shona people of Africa.
During his visit, Maraire visited the hut of a n’anga with his mother and brothers. He was instantly drawn to a mbira in the room.
“We were on some Biggie and Tupac at the time,” Maraire says.
“That’s what was hot and what was out. [So] we were just being all wild and I saw the mbira, and I was like, ‘Yo, can I see that?’ The lady looked at me and said something, but I had to ask my mom because I don’t speak Shona. She was like ‘Yeah, it’s cool.’ ”
Maraire started playing the instrument when he was 18 months old, and, from his dad, learned of its many different styles and tunings. He had never played this particular one before.
“I pick it up and the lady tells everyone to be quiet, and I start playing. Then all of a sudden, she starts prophesying, ‘This mbira is going to change the world. It’s going to be in front of millions of people.’ I put it down and she was like, ‘No, that’s yours.’ In her mind, it was always mine. The mbira is a very possessive instrument. It scared the life out of me, it still does.”
The nanga certainly was on to something – Maraire went on to fuse his fascination with hip-hop and his family’s African roots to create the spacey, avant-rap of Shabazz Palaces, a project he started with Ishmael Butler that found him touring the world and playing the humble folk instrument in front of huge festival crowds.
Maraire’s project Chimurenga Renaissance, a collaboration with musician Hussein Kalonji, explores his relationship with the mbira even further in riZe vadZimu riZe, the pair’s latest album, which masterfully mixes the artist’s rich background into a blazingly unique sound.
Chimurenga Renaissance – Boom